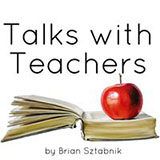 Of Note: By Teachers, For Teachers

As teachers we are busy, often isolated, and hungry for inspiration. Talks with Teachers, a podcast by Brian Sztabnik, engages education writers, education experts, and master teachers in conversations about their practice. Guests include award-winning national and state Teachers-of-the-Year who offer not only practical tips, but also compelling accounts of their own passion for their work. They share how their arrival in education shapes their practice and drives them forward. Guest experts, including the late Grant Wiggins and Scott Barry Kaufman of UPenn’s Imagination Institute, encourage teachers to shift paradigms. The podcast is made by teachers, for teachers as Sztabnik is a veteran high school teacher on Long Island whose mission is to create positive conversations around education and bring best practices to more educators. The 88 varied episodes invite listeners to connect to inspiring minds and reconsider their own assumptions about teaching, while offering brief overviews of some buoyant trends in education such as mindset theory, expertise, and mindfulness.

Last year Colin Kaepernick garnered the praise of some and the ire of others, including then-candidate Donald Trump. By kneeling during the National Anthem, he launched a protest of racial inequity, police brutality, and systemic injustice in the United States. Kaepernick’s actions set off a wave of similar protests within the NFL. While a great deal of attention has been given to professional athletes’ non-violent, peaceful protests, reports have also come out since 2016 about American high-school students kneeling during the Anthem. Youth Radio recently highlighted the stories of students protesting at high-school sporting events. In a short audio essay, “I’m A Cheerleader, Here’s Why I Take A Knee,” student and Youth Radio contributor Sasha Armbrester thoughtfully describes the considerations she and her teammates make when choosing to kneel before football games. Armbrester’s evocative words detail the racism she faces and her desire “to be a role model at [her] school” as both a cheerleader and a person of color. Ultimately, for educators, stories like Armbrester’s put in sharp relief the current social and political landscape and its impact on our schools, our students, and ourselves.

A Kind of Urging Towards

This article by Zoe Greenberg in the New York Times offers a helpful (albeit brief) survey of the gender landscape at the moment, from region to region and school to school. Greenberg cites a plurality of schools and curricula, from those forbidding teachers to speak of gay and transgender people in positive terms, to those embedding considerations about gender into the curriculum or "loosening up the whole idea of gender, for every kid." The piece provides glimpses into the range of attitudes and approaches to questions about gender without ultimately advocating for a particular side. Instead, Greenberg captures the openness and fluidity of children around notions of gender relative to the attitudes and understandings of adults, a kind of urging towards a "progressive" and non-binary way of thinking about gender. Greenberg overviews some of the changes, challenges, and opportunities as understandings of gender evolve in our world. She points to a preponderance of questions about who the experts are: teachers, parents, and/or students themselves? Shedding light on the incredible variations of opinion, Greenberg's piece is an invitation to be curious, to learn more, and to engage with colleagues about how we’re approaching the gender conversation in our own schools.

Most students prepare for tests by rereading material and reviewing their notes. But compared to only restudying material, students learn more and retain more when they take practice tests that involve retrieval – the free recall of information. The evidence indicates that retrieval practice increases achievement across a wide array of educational levels. These are the findings of a meta-analysis synthesizing 118 studies on the effects of practice tests on learning. The effects were amplified for some students when they received feedback on practice tests before taking final tests. Feedback provides the opportunity to correct errors and retain correct answers on a later test, particularly boosting confidence for students who struggle. The authors advocate the use of frequent quizzes as a learning tool, so that teachers and students can assess knowledge gaps, rather than high-stakes tests, such as final exams, used for summative purposes. Other forms of retrieval practice that can improve classroom learning include: increasing wait time after asking a question so that all students can process the question and gain the cognitive benefit of retrieval practice and teaching students how to incorporate retrieval practice as part of their studying routine. 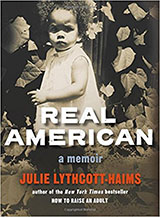 In this beautiful and affecting memoir by Julie Lythcott-Haims, author of How to Raise an Adult, we are privileged to be given the opportunity to understand the insidious ways that American racism shaped Ms. Lythcott-Haims, a biracial child growing up in mostly white environments in the Midwest. As the only child of an African-American doctor and his white British wife, Lythcott-Haims reveals the corrosive impact of years of micro- and macro-aggressions and how these shaped her sense of self well into adulthood. She is able, with unflinching clarity, to talk about her struggles in parenting, with her white Jewish husband, her own biracial children. Additionally, she chronicles the many ways in which she faces her fears, particularly for her son as he grows up as an African-American teen in American streets where black males are under threat. Educators, parents, and students who found Lythcott-Haims’s first book a great source of wisdom and advice will similarly find deeper understanding and inspiration from this one. Lythcott-Haims’s courageous meditation on her struggle with internalized racism and her ambivalence about an America, which still has far to go in doing right by its citizens of color, is vital reading for anyone working in an educational setting. 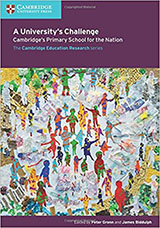 Partnerships between independent schools and universities have long existed, to the benefit of the wider education community. These schools and universities can often be found at the intersection between theory and practice and are often in particularly strong positions to collaborate in addressing, in both practical and research-based ways, this key question: How do children learn best? However, there has been a shortage of documentation about these partnerships themselves, and what the driving principles and challenges are in such important work. This book looks carefully at what is possible. The University of Cambridge, Great Britain, opened its new elementary school in 2015. This volume tells the story of the Cambridge University Primary School from concept through the challenges and rewards of building "The Nation’s School." It offers theory-inspired analysis of the opportunities and importance of such a partnership within its local community, its country, and internationally. It is scholarly and accessible, detailing how an innovative primary school is addressing the learning needs of its pupils while taking a place in policy making, teacher training, and research. As it chronicles one university/public school experience, it also provides candor, encouragement, and promise to any school leaders looking for a wider reach and innovative partnership possibilities for their own institutions. 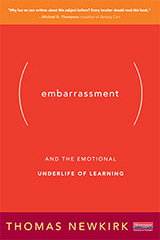 Under the Umbrella of Embarrassment

Embarrassment and the Emotional Underlife of Learning by Thomas Newkirk
Heinemann, October 1, 2017

In this wide-angled reflection, Thomas Newkirk pulls from the work of many influential thinkers, ranging from Carol Dweck to Daniel Kahneman, Erving Goffman to Brené Brown, as he considers how recent research about memory, mindset, economic decision-making, and stereotype threat come together under the umbrella of embarrassment. All learning demands that we take performative risks that leave us vulnerable to embarrassment, and in Newkirk’s own words, "any act of learning requires us to suspend a natural tendency to want to appear fully competent." Newkirk unearths the fear of embarrassment underlying seemingly irrational choices that put up barriers to learning; he is particularly compelling on the ways that embarrassment hinders help-seeking. For the specific subjects of math, reading, and writing, Newkirk offers strategies (some inspired by the field of sports) for how to face embarrassment head-on and diminish its negative impact. While Newkirk’s work is generally synthetic rather than critical, he does offer critiques of the ways that current buzzwords like "grit" and "growth mindset" have been oversimplified in the mass media, and he urges moderation in how we respond to recent recommendations about effective praise. This book is a thought-provoking read about how to internalize a voice that helps us to practice "self-generosity." 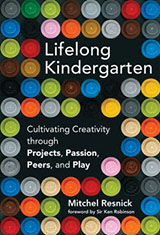 The Right Kind of Spiral

Mitchel Resnick's book, Lifelong Kindergarten: Cultivating Creativity Through Projects, Passion, Peers and Play, argues that schools make a big mistake when they become less like kindergarten as children move through them. Resnick, who has worked at MIT's Media Lab for many years and whose research group created the Scratch programming language, believes that there is a direct relationship between the collaborative creativity fostered in kindergarten classrooms and the development of "X students" – innovative risk-takers he thinks are better suited to the future than those who earn straight A's. What makes kindergarten such a hotbed of 21st century skill development is its fairly universal commitment to what Resnick calls the "Creative Learning Spiral," a teacher-designed, student-driven process that begins and ends with imagination and moves through several key stages including creation, play, sharing, and reflection. "Unfortunately," says Resnick, "after kindergarten, most schools shift away from the Creative Learning Spiral. Students spend much of their time sitting at desks, filling out worksheets, and listening to lectures – whether from a teacher in the classroom or a video on the computer." If creativity is essential to innovation, and an innovative, collaborative mindset is a goal of 21st century schooling, then Resnick’s argument in favor of threading the educational needle with experiences based on kindergarten essentials is very compelling.