Walkouts, Marches, and the Desire to “Do Something:" What you Need to Know about Stoneman Douglas Activism by Cory Collins
Teaching Tolerance, February 20, 2018


Resources for Talking and Teaching About the School Shooting in Florida by Natalie Proulx and Katherine Schulten
The New York Times, February 15, 2018

On February 14, 2018, teenager Nikolas Cruz, armed with an AR-15, went to the high school where he had recently been a student and killed 17 students and teachers. According to Education Week, this was the sixth school shooting in the United States since January 1st of this year. In the painful aftermath of the Marjory Stoneman Douglas High School massacre in Parkland, Florida, difficult truths have again been laid bare, and the nation is divided not only over the need for more effective gun control legislation, but also about the ethics and logic of arming classroom teachers, which President Trump has said is warranted as a deterrent. In response to these distressing events and statements, teachers, citizens, and perhaps most important, students, have raised their voices in resistance. Many are asking, “What can be done?” In response, Cory Collins of Teaching Tolerance has put together a list of action items, some public, some more private, that can be taken to protest school shootings, insufficient gun legislation, and the proposal to arm educators with weapons. Along with the student-started #NeverAgain campaign are a 17-minute walkout on March 14 at 10:00 a.m. and The March for Our Lives on March 24 in Washington,D.C.  #NationalSchoolWalkout, a second nationwide school walkout, is planned for April 20th (on the 19th anniversary of the Columbine massacre). For those unable to participate in public demonstrations, thoughtful classroom conversations will be highly effective. Students and teachers can watch Emma Gonzalez’s speech, discuss the #NeverAgain Twitter feed, create a mural honoring victims, make a “Collage of Concerns,” or use the New York Times column, “Lesson Plans,” where there are a number of excellent talking points and ideas gathered from teachers and students in response to the Parkland shootings. Students themselves are not being silent, as Emily Witt describes in her New Yorker article. As one 15-year old sophomore from West Boca Raton High said, "We have to do this ourselves because, frankly, no one’s going to do this for us. Change is necessary. We need change to be safe.”

Evidence of the Journey

Sparked by organizations of public and private school practitioners and researchers, several initiatives aimed at reshaping college admissions to put more emphasis on learning and student attributes are underway. Tom Vander Ark describes a movement in the private school sector, where leaders of 137 schools have organized The Mastery Transcript Consortium. The Consortium is advocating changing the high school transcript from a document that lists courses and grades to one that provides evidence of accomplishment through work products of authentic learning. The purpose is to inspire meaningful learning that focuses on demonstrated mastery of knowledge, skills, and habits of mind rather than course listings and grades achieved through memorization and tests. The Mastery Transcript is organized around performance areas, not content courses, and mastery standards are defined by the crediting high school. With the absence of grades, the Consortium is committed to developing software that college admissions officers can access easily to read Mastery Transcripts. In the public sector, as Gerwitz describes, a newly formed group of researchers called Reimagining College Access, led by the Learning Policy Institute and EducationCounsel, similarly advocates using performance assessments in college admissions to better gauge student learning and for course placement. The group is organized into three task forces: one is focused on creating a process colleges can use to quickly judge the quality of portfolios and other work students submit; a second aims to identify states, districts, and higher education institutions that use performance assessments to serve as models of the approach; and a third hopes to create software to hold and access student work. With other groups making similar requests, colleges will be challenged to alter their practices in ways that are feasible and affordable. Practitioners need to participate in finding a solution. 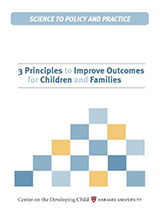 This most recent in a series of incisive and compelling reports from The Center on the Developing Child at Harvard University is timely and immediately useful to anyone working with children. With its mission to drive science-based innovation to achieve breakthrough outcomes for children facing adversity, the Center takes up issues with a rare clarity, creating universal application for children everywhere. Here, the authors identify a set of "design principles" that policymakers and practitioners in many different sectors can use to improve outcomes for children and families. That is, to be maximally effective, policies and services should: 1) support responsive relationships for children and adults, 2) strengthen core life skills, and 3) reduce sources of stress in the lives of children and families. The report strengthens its reach by elaborating for each principle specific ways, means, approaches, and priorities that work, that are evidence-based, and that make measurable differences in the lives of children and the adults they will become. The report’s strength for schools is that it creates and draws on a common understanding of how positive development can be either promoted or derailed, allowing practitioners to think in new ways about how parents, community services, and classrooms can do a better job supporting children and families. 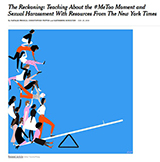 The Reckoning: Teaching About the #MeToo Moment and Sexual Harassment With Resources From The New York Times by Natalie Proulx, Christopher Pepper, and Katherine Schulten
The New York Times, January 25, 2018

Following the barrage of stories related to the #MeToo movement, Learning Network educators Natalie Proulx, Christopher Pepper, and Katherine Schulten team up to offer this rich, dynamic sequence of potential lesson plans for our classrooms. From topic introduction strategies to learning reflection prompts, the sequence is impressively comprehensive and designed to be driven by student readiness and inquiry. Replete with hyperlinked resources, Proulx, Pepper, and Schulten’s unit on sexual harassment offers articles, definitions, videos, frameworks, and discussion questions. Inviting scholarly discourse throughout, they account for a wide variety of learning styles, proposing a jigsaw activity, a graphic organizer, and an interactive timeline, to name a few approaches. Often differentiating by interest, the curricular sequence moves through building background knowledge on sexual harassment, understanding its impact, debating the question of whether or not #MeToo is going too far, considering teenagers’ experiences, and responding to learning through creative means. The lessons lead students through their own considerations of this topic, inviting them to wrestle with some of the complexities and nuances involved, as they read and discuss multiple perspectives, including opposing perspectives. Journalists, authors, and researchers have been urging us to teach #MeToo, and this Learning Network unit brings us thoughtfully-curated materials we can use or draw from right away, as we guide students, ultimately, to learn what they think and what, if anything, they want to do about it. 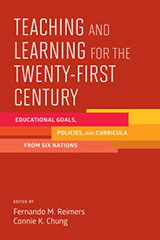 Using the comparative method, Fernando Reimers and Connie Chung present six different approaches to 21st century education, seeking to bridge the gap between the acknowledgement that 21st century skills are essential for our students to successfully interact with myriad cultures, and the fact that we lack a unified theory about how these same competencies relate to one another to inform curricular choices. A second goal of the book is to provide specific examples that evidence the important role that school leadership can play in the development of these competencies to foster meaningful student learning. By examining the curricular frameworks of Chile, China, India, Mexico, Singapore, and the United States, the authors contribute to the growing body of research on comparative educational policy and international curriculum studies. Furthermore, by looking at countries with different levels of economic development in diverse regions of the world, Reimers and Chung are able to present a study that is relevant to educational leaders across the independent school network. 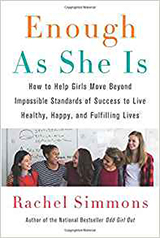 Enough As She Is: How to Help Girls Move Beyond Impossible Standards of Success to Live Healthy, Happy, and Fulfilling Lives by Rachel Simmons
Harper, February 27, 2018

Rachel Simmons’ new book presents a persuasive argument about interventions adults should make to try to alleviate some of the pressures that students in general, and girls in particular, have internalized. In the era of what Simmons calls the "College Application Industrial Complex," school-related stakes are high for all but especially, says Simmons, for girls who "look exceptional on paper but are often overwhelmed and anxious in life." Why do so many girls feel that no matter their accomplishments, they are still failing? Simmons identifies "role overload" – the idea that girls try to play more roles in their lives than they are able to be successful in – and "role conflict" – the fact that more often than not, these many roles are at odds with one another. What teachers and parents can do to help is quite simple, says Simmons. Rather than tell girls to stop being perfectionists, be more confident, or take more risks, Simmons suggests we engage in honest conversations with girls about the culture we all live in together and seek to redirect their catastrophizing when it occurs. 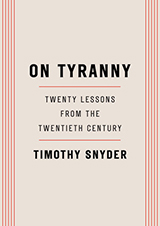 Taking Responsibility for the Face of the World

Yale Historian Timothy Snyder’s book, On Tyranny: Twenty Lessons from the Twentieth Century, is an important reminder regarding the potential fragility of the American experiment. With a style evocative of a Thomas Paine pamphlet, this short work expands upon the following themes:

These themes are drawn from Snyder’s career studying the Holocaust, the Cold War, and totalitarian regimes in Eastern Europe, and they apply his considerable learning and real world experience to the current state of American politics. Snyder’s work provides some valuable lessons in thoughtful citizenship, regardless of one’s ideology, and it will be of interest to educators who are working with students to help them understand their responsibilities within our social contract. The work is especially suited for Upper School history classes, both European and American, and could be equally illuminating for student government or social justice initiatives in schools.