Of Note: Divided and Impoverished

The Birth of the New American Aristocracy by Matthew Stewart
The Atlantic, June 1, 2018

"The defining challenge of our time is to renew the promise of American democracy by reversing the calcifying effects of accelerating inequality," Matthew Stewart writes in this ten-section essay, exploring the economic supremacy of the "9.9 percent," the group he deems the new American aristocracy. About halfway in, he gets to "the mother lode of all affirmative action programs for the wealthy," "the private school." Independent school educators (and all members of our communities) should take note. Stewart makes a compelling and provocative argument that independent schools are among the key players in the country’s decreasing mobility and increasing inequality. "Education," he explains, "has been reduced to a private good, justifiable only by the increments in graduates’ paychecks. Instead of uniting and enriching us, it divides and impoverishes." Stewart enjoins readers (likely among the 9.9 percent) to ask ourselves in education what we are doing to "open minds" and "make good citizens," as a "genuine education" should. For those less swayed by the call to restore American democracy, Stewart offers another incentive: "This insecurity of privilege only grows as the chasm beneath the privileged class expands." So as the financial landscape in independent schools (and otherwise) shifts, Stewart offers our imaginations some galvanizing questions: How can we hold to the American idea as a guide star? How can we unite and enrich our citizenry? How can we restore hope of opportunity for all?

Math is essential for entering STEM fields, but girls are less likely to succeed at math. This pithy article provides a perspective on the source of the problem and how to address it. While abundant research suggests that, on average, boys and girls have similar abilities in math, girls are likely to think that they are not good at math. For girls, self-perceived ability affects academic performance, and that is the crux of the problem. Girls naturally excel in language arts, sometimes leading them to think that they are not capable in math. Thinking you are not good at something often discourages pursuing the subject, so girls may gravitate to the language arts and avoid practicing math. The result is that they then lack a foundation for higher math and fail to establish the neural pathways necessary for success. Schools exacerbate the problem if early on they focus on conceptual understanding sacrificing drill and practice. The writer of this opinion piece, Barbara Oakley, a professor of engineering and author of a book and acclaimed Massive Open Online Course on learning, argues for teaching the fundamentals in math with parental encouragement to practice, especially for girls. While Oakley’s explanation is compelling, some may argue that drill and memorization are certain to discourage math study and that being hardwired in math is what makes the difference. Schools may want to explore how math is being taught in the early grades, using this article to spark a lively discussion. 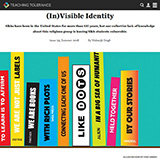 One in Five is Angry

Ignorance and suspicion targeting Sikhs in contemporary American society is an all too common occurrence. Recently, New Jersey state attorney general Gurbir Grewal was repeatedly referred to as "turban man" by talk radio hosts. A 2013 Stanford University report called Turban Myths shows 49 percent of Americans believe Sikh is a sect of Islam and one in five Americans report that seeing turbans makes them feel angry or apprehensive. Sikh students often find themselves the targets of harassment and bullying when wearing a turban. The Sikh Coalition's recent report Go Home, Terrorist shows that Sikh student are bullied at more than double the national average with more than 50% of students surveyed reporting instances of name calling, psychological abuse, and physical violence.  For teachers looking for resources, Teaching Tolerance has collected a large number of primary sources and videos to help educate students about the Sikh religion and people. Some highlights include U.C. Davis’s Pioneering Punjabis Digital Archive and the Sikh Coalition’s We Are the Sikhs. The Kaur Foundation also has the Diversity Education Initiative Cultural Safari which includes a 17 minute video and curriculum. In the end, we all play a role in ending bigotry and cultural bias. 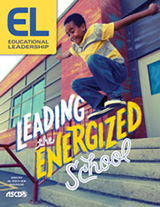 Conversations surrounding effective teaching often center on individual teachers in individual classrooms. In their Educational Leadership article, "The Power of Collective Efficacy," researchers Donohoo, Hattie, and Eells broaden their lens, describing the power of "collective efficacy." In their synthesis of several meta-analyses, the authors show that the beliefs teachers hold about their school’s ability to impact students is strongly associated with student success. When comparing the effect size of potential influencers, the analysis suggests collective teacher efficacy has an influence almost triple that of the next strongest one, prior achievement. Building a culture of collective efficacy takes time and must be foundational to a school’s ethos: educators should work to know "thy collective impact." Collaborative structures must be put in place to enable and encourage dialogue on learning and to help build confidence and trust in colleagues. Moreover, dependable data, which, when analyzed, is focused on collective success helps frame the conversations and can show collective impact. To create a culture of collective efficacy takes intentionality, but the rewards are reinforcing over the long term. In independent schools – where autonomy has traditionally been valued – shifting to a culture of collaboration demands a clear vision and patience. The recent work of Donohoo, Hattie, and Eells can help to set the pace. 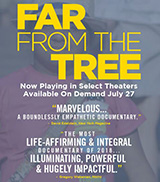 Far From the Tree by Rachel Dretzin and Andrew Solomon
July 20, 2018

Based on Andrew Solomon’s book of the same title, the documentary Far from the Tree is an extraordinary study of families raising children who are profoundly different from themselves. The film explores the ways that a diverse array of "disabled" children find community with others like them, whether through a group living situation for high-functioning people living with Down syndrome or the conference for the little people of America. The viewer simultaneously witnesses the profound love and struggle within families who cannot fully comprehend or empathize with their child. At the heart of the film is the question: where is the line between disability and positive difference? The viewer watches with deep empathy as parents describe their fears for their offspring whom the world sees as abnormal, and, then equally, for their children who don’t necessarily want to be "fixed" and do not feel themselves to be defective. At one point, Solomon, whose own life as a gay man prompted him to explore these questions, says that homosexuality in his lifetime went from being a "disease" to be "cured" to an identity to be embraced. What other "disabilities" will undergo this transformation as we seek to more deeply understand the experiences of people with profound differences? Currently, we are seeing this transformation unfold within the deaf community and for people living with autism. This film is crucial viewing for any educator, particularly those working in schools where students with differences are integrated into their classrooms. It is also a documentary to screen for high school students as it will prompt discussions that will help them to become more compassionate, welcoming, and open-minded citizens, classmates, and allies. 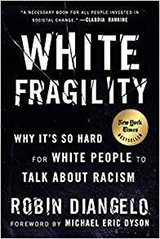 White Fragility: Why It's So Hard for White People to Talk about Racism by Robin Diangelo
Beacon Pres, June 26, 2018

“Interrupting racism takes courage and intentionality,” says Dr. Robin Diangelo in White Fragility: Why It’s So Hard for White People to Talk About Racism. As Diangelo argues, however, for white people, such courage and intentionality is often overwhelmed by their own defensiveness and fragility when they are implicated in white supremacy. White fragility, which Diangelo defines as “a state in which even a minimum amount of racial stress becomes intolerable, triggering a range of defensive moves,” is inextricably tied to a particular aspect of white privilege – namely, that white people believe they are unique individuals who transcend generalization, resulting in their inability to see themselves in racial terms. “When pressed to do so,” says Diangelo, “[white people] refuse to engage further.” Diangelo, who has a Ph.D in Multicultural Education and has spent over two decades leading diversity and cultural competency trainings for companies and other institutions, steadies much of her focus on white liberals (like herself): “To the degree that white progressives think we have arrived, we will put our energy into making sure that others see us as having arrived.” The consequences of this behavior, Diangelo asserts, are deeply damaging. To be sure, how white privilege is explored and engaged is acutely relevant and important within independent schools, and this book – particularly its final chapter, “Where Do We Go From Here?” – should be required reading. 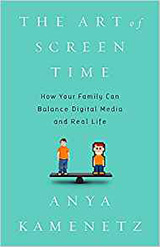 The Art of Screen Time: How Your Family Can Balance Digital Media and Real Life by Anya Kamenetz,
PublicAffairs, January 30, 2018

Schools have to play catch-up in our accelerating world. Each year, campuses increase their Wi-Fi, companies vie for technology budgets, administrators revise handbooks to include the latest social media, and teachers post more assignments online. In The Art of Screen Time, and in search of practical advice, NPR correspondent Anya Kamenetz wades through the click-bait studies that demonize or deify screen time. Parents are her intended audience, but educators should take note. Her measured synthesis of the research seeks to contextualize findings, identify extreme outliers, and address fears. As she “un-garbles” the mostly frightening research, Kamenetz offers candid experiences from surveys and her own parenting. Her balanced approach identifies warning signs, but also empowers parents to intentionally embrace the positive potential of technology. As she contemplates the role of screens in schools, Kamenetz critiques the often-unintentional use of technology and reminds us to be wary of the commercial motivations behind grabbing adult and child attention. The book then moves to address adult relationships to devices, and the shaming, guilt and harmful modeling that constant connectivity entails. This book is a timely read that extends to the digital world the Sizers’ caution that “the students are watching.” 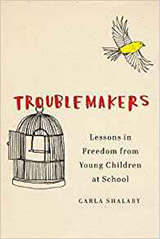 The Truth about Outliers

In Troublemakers, Carla Shalaby questions the efficacy of common management techniques for students who are behavioral outliers. She asks what the students’ behavior can tell us about them as human beings and as learners, and what lessons these students have for educators and their peers. These students are too often made to conform to systems that value invisibility over individual freedom. For Shalaby, teaching is a political act. Shalaby suggests that educators recenter their practice in love. In independent schools, students are often asked to conform to the existing institutional structures including behavior expectations. Troublemakers offers an opportunity to see these institutional practices from the point of view of the most vulnerable students who experience the full weight of them. Independent schools were born out of a desire for the freedom to educate children in accordance with community values. It is in the interest of freedom that Shalaby suggests educators take a critical look at how schools nurture freedom of learning for all students.