The college, career, and civic life (C3) framework for National Social Studies Standards, published in 2013, lays out a curricular pathway aimed at strengthening the civic knowledge and engagement of future generations. By the end of the second grade, authors of the C3 framework assert, students should be able to "describe the roles and responsibilities of people in authority." By the end of the fifth grade, students should be able to "distinguish the responsibilities and powers of government officials at various levels and branches of government and at different times and places" and be able to "examine the origins and purposes of rules, laws, and key US constitutional provisions." Surely, then, whether and how an elected president may be removed from office for "high crimes and misdemeanors" would fall within these elementary and middle school benchmarks. According to Education Week's Stephen Sawchuck, however, teachers are not uniformly prepared or willing to teach the topic of impeachment. The infrequency and complexity of the impeachment process likely has contributed to today's classroom challenge. Says Sawchuck: "Impeachment's rarity means that while teachers do cover the topic in civics and government classes, few have detailed lesson plans on it in their back pocket." Further, "extreme partisanship infecting almost everything about presidential politics" can make teaching social studies in general and civics in particular a fraught endeavor, Sawchuck notes, however, "avoiding teaching the topic is every bit as much a political decision as diving right into it." Sawchuck proposes three lenses through which to view impeachment: a background knowledge and civic underpinnings lens; a historical, comparative lens; and a current lens. Reading primary documents, such as the Constitution, and comparing impeachment proceedings from other times and in other countries, can contribute to meaningful learning and thoughtful teaching in a time of heightened partisanship. 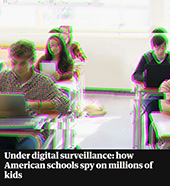 Under digital surveillance: how American schools spy on millions of kids by Lois Beckett
The Guardian, October 22, 2019

This article takes a frank look at the methods of surveillance being deployed in schools across America. In the wake of school shootings and concerns about school safety, schools are increasingly turning to sophisticated, pervasive forms of surveillance to monitor students' communication on and off campus. Although "there is still no independent evaluation of whether this kind of surveillance technology actually works to reduce violence and self-harm," the article notes that school security has mushroomed into a nearly $3 billion a year industry with various companies claiming to have helped school officials intervene in countless situations. At the same time, Amelia Vance, Director of Education Privacy at the Future of Privacy Forum, notes that "[a] lot of the questions and a lot of the privacy concerns haven't [been] thought of, let alone addressed." While proponents of the technology point to its role in promoting safety and training students in "digital citizenship," critics point to civil liberties and privacy concerns, the problems of habituating students to constant surveillance, and the potential for algorithms to misunderstand what students write and do online, not to mention the dangers of involving law enforcement in ways that are unfair or prejudicial to students. While it is clear that schools need to use all the tools available for maintaining student safety, this article sounds a necessary alarm about the potential downsides to adopting surveillance technology without appropriate safeguards. 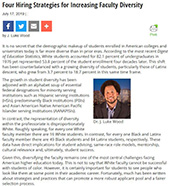 Doing What We Say

In his article, "Four Hiring Strategies for Increasing Faculty Diversity," Dr. J. Luke Wood, Professor and Chief Diversity Officer at San Diego State University, articulates a persistent challenge facing colleges and universities today: the need to diversify teaching faculties, which still remain disproportionately white. Dr. Wood's research and data-driven methods include: implicit bias training, casting a wide net within professional networks to attract a diverse candidate pool, the presence of a trained diversity advocate on the hiring committee, and inclusive job search criteria that prioritize candidates with previous experience teaching historically underrepresented communities. Dr. Wood asserts that incorporating these recommendations does not mean "that the successful candidate will necessarily be a person of color;" instead, he presents this approach as a way to support yielding a more racially diverse applicant pool as well as to ensure equity in the hiring process. Implementing these ideas can have a significant impact on helping institutions to live out their mission statements, many of which cite a commitment to diversity, equity, and inclusion but fall short in making those efforts reflective within their hiring practices. 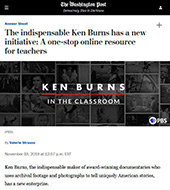 A Storyteller Shares His Tools

The indispensable Ken Burns has a new initiative: A one-stop online resource for teachers by Valerie Strauss
Washington Post, November 19, 2019

To make using his documentary films in classrooms quick and easy, Ken Burns has created a comprehensive online resource specifically for teachers. In this interview in the Washington Post, Burns describes his vision for the site. Teachers across disciplines, but particularly in English and history, can use short clips from his various films to add emotional resonance and actual footage to their lessons, to demonstrate to students how to use primary sources, and to model for students how to use story-telling as a tool to hook audiences to engage more powerfully with content. The site is not only searchable by historical era or particular film, but also by keyword and topic. Burns and PBS collaborated directly with classroom teachers in order to ensure that the site will meet educators' needs in new and important ways. Burns also describes some of his future projects, which teachers will welcome, on the Holocaust, Ernest Hemingway, and a variety of other topics. In an era where close reading of film and image is as vital as ever, Burns is providing a free resource for educators that fills an important gap. 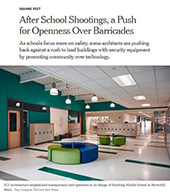 Protections that Nourish and Safeguard

After School Shootings, a Push for Openness Over Barricades by Lisa Prevost
New York Times, October 22, 2109

This article pushes back against barricades, both concrete and psychological. It is a departure from intuitive desires to close-in and close-off after unspeakable disaster. Instead, it calls for openness, not only in the design of buildings and space, but also in communities that must be strengthened to provide what children need most. The article posits a push for design features in schools that increase safety while avoiding a barricaded experience for students. Here, the approach is to maintain visual access and connection with a community, including intelligent design, alongside advocating for gun control and new lockdown technology. The suggestions are specific and poignant. The architects of the new Sandy Hook Elementary School in Newtown, Connecticut, for example, speak of their rain garden spanning the entire frontage of their school. It requires that visitors cross a bridge to enter. Safe school design bills currently before the Senate and Congress are referenced, but the emphasis is on the vision to see beyond barricaded buildings to gun and other controls, including smart design decisions that load buildings with protections that both nourish and safeguard. 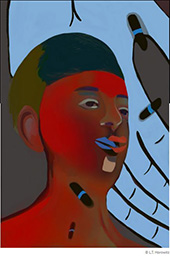 A Cure in Search of a Fix

In "Stammer Time," journalist Barry Yeoman looks beyond the medical model of disability in a way that is both informative and inspiring. Stuttering, which affects about one percent of the population, is his anchor, and he begins with a simple enough story about attending an annual conference for stutters. The situation becomes existential and dire when a research funding pitch is shared with the participants: if you could contribute to a cure for stuttering, "[freeing] the voices of millions of Americans," would you? The question affects the author, and some of his associates and friends at the conference, in a deeply personal way. In suggesting a balm or a "fix," it threatened to upend a close-knit community and indicated a demoralizing trend for those living with unique challenges. Positioning stuttering as a "pathology in search of neutralization" misses the opportunity to "reframe stuttering as a trait that confers transformative powers." Yeoman's essay becomes more universally applicable when he makes a quick, associative leap to other conditions that can be locked or unlocked by the language we use to describe them: autism can be viewed as a set of behaviors that need to be reduced and hidden or as a sign of neurodiversity that should be celebrated. And deafness can be framed as either "hearing loss" or "deaf gain." Yeoman's resounding question is one that could be asked of all schools that celebrate their inclusivity or their communities while sometimes signaling a passion for sameness:  "Can we stop believing that the problem lives inside our bodies? Might the problem lie in a society that, in its quest for order and efficiency, makes no accommodation for people who speak (or walk or think) differently?" 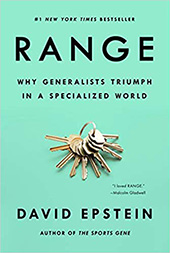 The Song of Lateral Thinking with Withered Technology

"Don't feel behind," urges David Epstein in his wonderful new book, Range. Drawing on examples from sports, education, industry research, the arts, organizational behavior, and science, Epstein makes a powerful case for encouraging our students – and ourselves – to be patient, to try many things and not one thing, and to "learn by living." Epstein recounts how, for example, in the mid-1960s a young electronic tinkerer named Gunpei Yokoi joined Nintendo, which began as a playing card company. Hired to fix machines, Yokoi employed "lateral thinking with withered technology," or mixing applications to generate products that relied on reimagining existing technologies in new uses. Over the coming decades Yokoi invented dozens of devices, including the Game Boy which sold over 100 million units. As Yokoi recounted, "I don't have any particular specialist skills. I have a sort of vague knowledge of everything." This is what Epstein wants us to cultivate: by emphasizing ambiguity, discouraging consensus for its own sake, and learning to "drop our familiar tools," we will discover what we truly love to do. Much of what Epstein argues flies in the face of the early specialization our students experience, which is exactly why this book is so important.