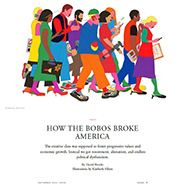 Among the Creative Class

"How the Bobos Broke America" by David Brooks
The Atlantic, August 2, 2021

For educators who read Bobos in Paradise twenty years ago and for those who didn't, David Brooks has done it again: in this intelligent and complex reflection, Brooks extends his research and synthesizes old and new learning about 'the creative class' and its domination of culture. He cites Jonathan Rauch's naming of "the epistemic regime – the massive network of academics and analysts who determine what is true." Elite education lies at the heart of the phenomenon Brooks describes; whether or not educators agree with his precepts, Brooks makes a compelling (and ambitious) argument linking elite education, the myth of meritocracy, migration to big cities, politics, and privilege and power. As sociology or as a thought experiment, this piece is a provocative read. "How could people with high-end powerboats possibly think of themselves as the downtrodden?" Brooks asks. "The truth is, they are not totally crazy." Brooks places himself among the creative class he critiques, and he reflects on what he got wrong in his book twenty years ago. Essentially, he believes that the creative class has failed to accept leadership responsibilities and failed to earn legitimacy and trust. Brooks offers provocations, including the idea that elite education is ultimately individualistic and self-serving, that "the meritocracy seems more and more morally vacuous," and that we must dismantle the current system. Educators in independent education will benefit from grappling with his ideas.