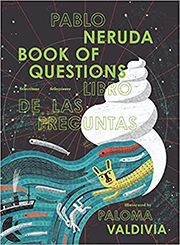 One of the greatest authors of the 20th century, Chilean poet and diplomat Pablo Neruda received numerous accolades throughout his lifetime including winning the 1971 Nobel Prize in Literature. In a newly-published edition of Neruda's Book of Questions, originally completed only a few months before his death and composed of a sequence of poems written entirely as questions, Spanish translator Sara Lissa Paulson and Chilean illustrator Paloma Valdivia infuse carefully chosen and beautifully arranged selections from Neruda's masterwork with new life and a new audience in mind: children. The medium of the book plays with the very idea of translation, breaking apart and rearranging Neruda's mysterious, musing, and playful question poems using striking images, text in two languages, and interactive fold-out pages. Neruda asks all of us to consider with an open mind fundamental questions about our world and ourselves, such as "Why do the trees hide / the splendor of their roots?" and "Where does the rainbow end, / in your soul or on the horizon?" As the book's editor points out, "What Neruda shares with us as an old man isn't an arrival at Truth, but the astonishing freedom of a curious mind that dares to reimagine the world again and again." By creating a version of Neruda's text that is accessible to children who speak different languages, come from different places, and live radically different lives, Paulson and Valdivia bring Neruda’s work full circle. They open spaces for children—and, indeed, for us all—to engage in this same act of reimagination, seeing the world around us in new and miraculous ways.