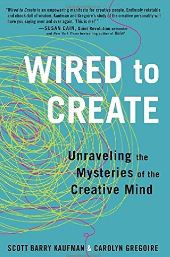 Fitting in the Misfits

Wired to Create: Unraveling the Mysteries of the Creative Mind by Scott Barry Kaufman and Carolyn Gregoire
TarcherPerigee, December 29, 2015

Scott Barry Kaufman and Carolyn Gregoire have teamed up to write the rare kind of book that is both deeply researched and utterly accessible - and it's a good news report. First, creativity is open to all (hence the title of the book); second, and best of all, certain habits can spark creativity. Daydreaming, being open to experience, seeking solitude, and playing the numbers (that is, creating often, even if you don't succeed) all support the creative act. Though the book is for the general reader, it will help educators and educational leaders understand better some of their students and colleagues. That "messy mind" that has trouble sitting through class could be hiding a burgeoning creative talent. And that teacher who misses deadlines because he's always experimenting and turning up fresh ideas is worth sheltering. If we want students to produce creative work - and if we, as teachers and school leaders want to produce creative work - we have to think about the way in which schools are designed and what is rewarded and promoted within them. As Kaufman and Gregoire write, creativity happens when we encourage "risk taking and originality, and give people autonomy to decide how they learn and create." People need "time . . . for personal reflection, daydreaming, and inner exploration." That these conditions seem so difficult to institutionalize in the schools we have now is worth noting. As Isaac Asimov said, "The world in general disapproves of creativity." Schools never should.