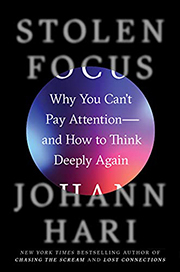 Stolen Focus: Why You Can't Pay Attention – And How to Think Deeply Again by Johann Hari
Crown (Penguin), January 25, 2022

In schools, in homes, and on screens, a disaster is unfolding, its effects doing grave harm to our brains and to humanity's ability to act for its own good. So argues Johann Hari in his new book Stolen Focus: Why You Can't Pay Attention–and How to Think Deeply Again. Hari draws upon interviews with a range of experts and data from the fields of psychiatry, communications, computer science, child psychology, nutrition, environmental science, and engineering to argue that societal forces have deteriorated our focus to a degree that is causing the world around us to go up in literal flames. While others see technology and "the attention economy" as the culprits, Hari broadens his lens to examine the combined forces of poor nutrition, lack of sleep, air pollution, excess work demands, school-testing, and, yes, a tech industry driven by "surveillance capitalism," the business model that monetizes our attention. In a resounding conclusion, Hari links our current inability to focus to the climate crisis, noting that we can prevent disaster if only we can manage to pay attention to the problem long enough to come up with solutions and act on them. Despite its subtitle, Stolen Focus is more call-to-collective-activism than self-help manual, and Hari offers three goals of what he hopefully terms "the Attention Rebellion.” In advocating for the banning of surveillance capitalism, the instituting of a four-day work week, and the restructuring of childhood around free outdoor play, he sets us on a path to reclaim our humanity.