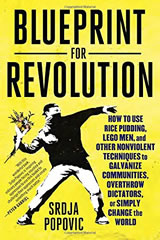 Blueprint for Revolution: How to Use Rice Pudding, Lego Men, and Other Nonviolent Techniques to Galvanize Communities, Overthrow Dictators, or Simply Change the World
by Srdja Popovic
‍Spiegel & Grau, January 2015

In an educational landscape craving constant and effective change, this book is a breath of fresh air. Popovic authentically recounts the successful Otpor! revolution in Serbia that contributed to the decline of Milosevic, whose repressive dictatorship had led to cultural and economic ruin. As the founder of the Centre for Applied Nonviolent Action and Strategies (CANVAS), Popovic has helped motivate, design and implement peaceful revolutions globally using tools like cottage cheese, turkeys and music; he even receives some credit for training the architects of the Arab Spring, though at times Popovic probably overstates his own influence. Importantly, he does not intend for this book to be for political activists alone. Fascinating, funny, and truly inspiring, Blueprint for Revolution encourages all members of society to take ownership of the change they want to see in their communities. The effective tools Popovic provides temper his predilection for strategic absurdity. Successful and unsuccessful movements are referenced, thus highlighting advocacy techniques with the most utility and chance of victory; for example, he presents “laughtivism,” the unification of supporters, the creation of a brand that has value to stakeholders and the selection of battles “big enough to matter but small enough to win.” This relevant and readable text equips school leaders with practical and personally enlightening skills and frameworks to help them execute both significant change and ongoing reform.