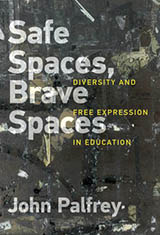 Caroline Blackwell, vice president of equity and justice initiatives at NAIS, writes in the 2017-18 Trendbook that in the month following the 2016 election, there were 1094 bias-related incidents, 226 of which took place in K-12 schools. Just as there can be no doubt that what happens in society at large impacts what happens in schools, there can also be no doubt that what happens in schools today will impact society at-large in the future. Such is the central premise of Phillips Academy Head of School John Palfrey’s new book, Safe Spaces, Brave Spaces, in which he makes an informed argument in favor of balancing first amendment ideals with unfaltering support for inclusion. To aid in such important work, schools should distinguish between safe spaces, defined as places where students can speak freely within affinity groups or other support networks, and brave spaces, defined as “learning environments in which the primary purpose of the interaction is the search for truth, rather than support for a particular group of students, even insofar as some of the discussions will be uncomfortable for certain students.” In seven brief, compelling chapters, Palfrey makes quick work of the major tensions and trends affecting schools and society at large. He addresses flashpoints including trigger warnings, microaggressions, and guest speakers on campus while making a case for the coexistence, indeed the necessity, of both diversity and free expression in schools.