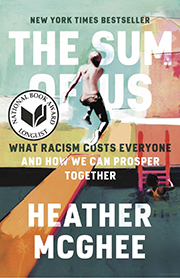 The Sum Of Us: What Racism Costs Everyone and How We Can Prosper Together by Heather McGhee
Random House, February 9, 2021

It has been plastered on t-shirts, scribbled across memes, and thrown down in argumentative diatribes: "Equal rights for others does not mean fewer rights for you. It's not pie." This rallying cry for equity combats long-held structural racism in America that is rooted in competition. The ugly truth is that the default white American understanding is that racialized groups compete directly with each other. Such a zero-sum paradigm is challenged by the aforementioned t-shirts and memes and thoughtfully taken up by Heather McGhee in her book The Sum Of Us: What Racism Costs Everyone And How We Can Prosper Together. McGhee's book illustrates how zero sum thinking hinders most Americans from achieving gains in infrastructure, health care, school funding, and wages. Throughout the text, McGhee recounts stories of workers and towns whose decisions to embrace a zero-sum approach result in a loss of progress for all. McGhee argues instead for a "solidarity dividend," which she demonstrates repeatedly can spark positive public goods when folks work together across racial and socioeconomic lines. McGhee's compelling, hopeful argument provokes critical thinking and is an ideal antidote to the notion that change is impossible. Educators and students alike will benefit from being introduced to McGhee.