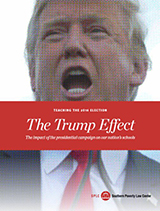 Of Note: Teaching Through the Election

The Trump Effect: The impact of the presidential campaign on our nation’s schools
by Maureen B. Costello
Southern Poverty Law Center, April 2016

This brief report from the Southern Poverty Law center attempts to weigh the impact of this year’s unique presidential campaign on students and teaching. Culled from an online survey conducted at the Teaching Tolerance website, the report’s data suggests that teachers believe that their students, and particularly children of immigrants and Muslims, are concerned about the divisive rhetoric of the campaign. They also report a hesitancy to teach about the presidential election, a rise of uncivil political discourse among their students, and an increasing anti-immigrant and anti-Muslim sentiment in their school communities. Respondents suggest that they are “teaching for their lives” and abandoning the usual conventions of political neutrality in their classrooms in favor of helping under-represented students feel supported. The study also suggests that a positive phenomenon of the presidential campaign may be an increased interest in politics among students and a call for the return of a more civil discourse, at least in the classroom. While the study readily admits that it likely contains biases and is largely nonscientific, it does provide a perspective of the national zeitgeist of educators at this particular moment in history, and it may inspire others to use the tools at their disposal to help make sense of this moment and possibly shape a more decorous future through their students.