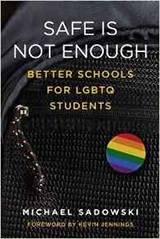 At a time when concerns about LGBTQ students are increasingly visible and debated, Michael Sadowski, formerly a teacher and GSA advisor himself, brings us Safe Is Not Enough, a new book about policies, curricula, and cultures to support LGBTQ students. Middle school, Sadowski reminds us, is a particularly crucial time, when sexist and homophobic language tends to soar. Safety, he says, is an important baseline, but we can’t stop there. The goal is inclusive culture -- to be affirming of and empowering for all our students and their identities. Sadowski advocates for student groups like the GSA, for focused diversity initiatives, and for being intentional in schools about providing mentors and role models for LGBTQ students -- for example, those who identify to the community as LGBTQ themselves. He presents a range of existing practices across schools, states, and zip codes, profiling, for instance, Welcoming Schools, where teaching about stereotypes and bullying is an explicit part of the curriculum. In addition to working to make our schools safe, Sadowski emphasizes actively cultivating self-acceptance in our student populations and school communities.