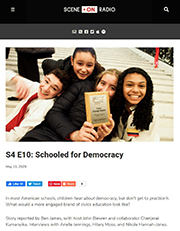 Picking up the Ball

Imagine, one day, you decide to learn the game of basketball. How would you go about it? Would you read a 200-page manual, only later being allowed to touch a ball? The hosts of this Scene on Radio podcast episode argue that this backward approach is similar to what is happening in schools; students are taught about civics but hardly get to practice it themselves. Ben James, a freelance reporter from Massachusetts, is featured. He went on the hunt to find a school where students fully engaged in civics education, or as he put it, "where the word 'public' was less noun and more verb." The episode follows a group of eighth-grade students at a magnet school in Lowell, MA, their teacher, Mike Neagle (2019 Massachusetts History Teacher of the Year), and their Action Civics curriculum. The students' work preparing for Civics Day is starkly contrasted with the testimony of the reporter's son, Silas, a student at a more traditional school. It's a tale that starts with a messy discussion and ends in triumph ultimately begging, "Why aren't more schools doing this?" The reasons are varied, as it turns out. Producer and Host John Biewen and collaborator Professor Chenjerai Kumanyika explore that and other questions at the end of the episode.