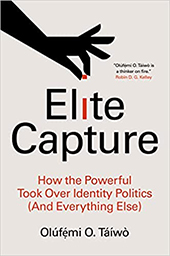 Rooms We Did Not Choose

Elite Capture: How the Powerful Took Over Identity Politics (And Everything Else) by Olúfẹ́mi Táíwò
Haymarket, May 3, 2022

Olúfẹ́mi Táíwò’s new book challenges readers to think less about individual agency and intention and far more expansively, globally, and structurally about the fact that “history has built the rooms around us [and] we find ourselves in places, and with people, resources, and incentives, that we did not choose.” In other words, it’s not as much about who is in the room as it is that some rooms have more power or influence than others; the very existence of such rooms causes problems for promoting equality. Táíwò is sympathetic of efforts to “[center] the most marginalized” and understands the impulses behind them, but his overarching critique is that these sorts of approaches orient “what little attentional power we can control at symbolic sites of power rather than at the root political issues that” underlie contemporary social ills. In the end, he admits that deference politics is “right about the what.” We do need to pay attention to people’s lived experiences and differences. At the same time, Táíwò suggests that deference politics is “wrong about the how, because the more we focus on changing our norms of interaction to ones that locally and cosmetically elevate the voices and perspectives in the room, the harder it becomes to change the world outside of the room.” Táíwò’s arguments are bracing, probing, and provocative – and well worth a read for anyone invested in creating a more just, equitable future.