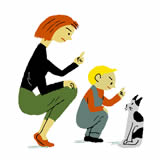 Alison Gopnik's article, "Our Need to Make and Enforce Rules Starts Very Young," highlights how very young children interpret adult actions as rules by which to live. She cites a study (by psychologists Hannes Rakoczy, Felix Warneken, and Michael Tomasello) that examines the extent to which three-year-olds are sensitive to rules. The psychologists found that the children were apt to see social rules and conventions even when they were not really there. The children came to believe a specific action was the "right" way simply because an adult was highlighting the action in a positive light. Gopnik says that rules become culture which then becomes our nature. Much like these three-year-olds, educators and students come to understand school by the social conventions of school culture. As we think about what attitudes and behaviors we want to instill, we should also consider how social conventions influence the nature of our students. Gopnik's article offers a lens with which to resee, and rethink, how we impose and enforce rules.