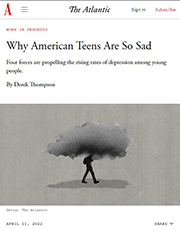 Submitted By:
Arlene Padilla, Convent of the Sacred Heart, NYC

Why American Teens Are So Sad by Derek Thompson
The Atlantic, April 11, 2022

In “Why American Teens Are So Sad,” Derek Thompson breaks down the myths or fallacies of mental health. According to the article, a survey given to approximately 8000 students demonstrated that students' mental health has declined over the last ten years by 18%. Thompson disagrees that this decline is related to teens misbehaving, being moody, or reacting to the pandemic. Instead, he pushes us to think about the real issues our teens are dealing with daily. The percentage of students contemplating suicide has increased, especially among girls and LGBTQ teens. This increase can be attributed to social media's impact on kids, especially when teens compare themselves to others. “One explanation,” Thompson offers, “is that teenagers (teenage girls in particular) are uniquely sensitive to the judgment of friends, teachers, and the digital crowd.” Also, the world beyond social media is harsh and adds to teens’ stress. Between gun violence, political turmoil, and war, our teens don't have hope. Lastly, parenting today is very “hands-on.” Parents want to solve problems for their children, which is understandable, but at what point do we stop "accommodating" our kids and instead allow them to practice developing solutions to their own problems? As educators, we must be mindful of all the factors contributing to a child’s mental health, and Thompson’s article provides concrete data and a clear overview.