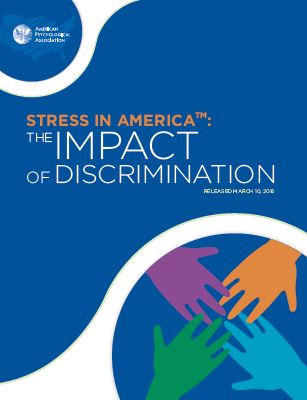 Each year for close to a decade, The American Psychological Association has published their Stress in America Survey results. The 2015 report includes a special focus on the impact of one particular stressor: discrimination. The report highlights the connection between discrimination and stress, along with the resulting impacts on relationships and overall health. This is a report where every finding carries purpose and import. It could become the basis for student analysis, staff development, educational policy setting or curriculum prioritizing. With focuses on specific aspects of discrimination that include gender identity, sexual orientation, finances, race, ethnicity, disabilities and access to emotional support, this survey opens a wide window to an unquestionably clear view of discrimination as reported by a large, representative sample of adult Americans. There are bright spots - the majority of adults feel confident in their problem-handling skills, and they expect good things to happen to them rather than bad. At the same time, there are trends that call for serious attention. For example, 25% of people report feeling fairly or very often that difficulties were piling up so high that they could not overcome them, compared to 16 percent in 2014 saying the same. There is nothing vague in the message of this report. It makes thinking about stress and its impact both more salient and more urgent.