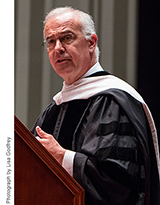 The Promise of Fulfillment

Many educators know and follow David Brooks’ New York Times writing and his books, most recently The Road to Character (2015). When he is asked to give a commencement address, he comes, not surprisingly, with ideas, humor, encouragement and advice. This spring, at the University of Pennsylvania, what was surprising was how little time he affords the graduates to take action. He points out that they have been called promising for a long time, right up until graduation day. At that point, though, something shifts. “Promising” is not enough, because it reflects someone else’s judgement and standards. He is clear: “Starting tomorrow, ‘promising’ becomes a verb. Now it’s your criteria that matters.” Those students who will have a fulfilling life, he asserts, know how to make, and live by, promises to family, vocation, a philosophy and a community. And he gives the grads advice on how to choose promises that matter and to which they can commit, because being good at keeping promises makes meaning of each day. This inspiring address goes an important step beyond giving students of promise one more gold star on the ledger. It offers the exciting and demanding invitation to lead best where it matters most – in selfless commitments that are rooted in service and that last.