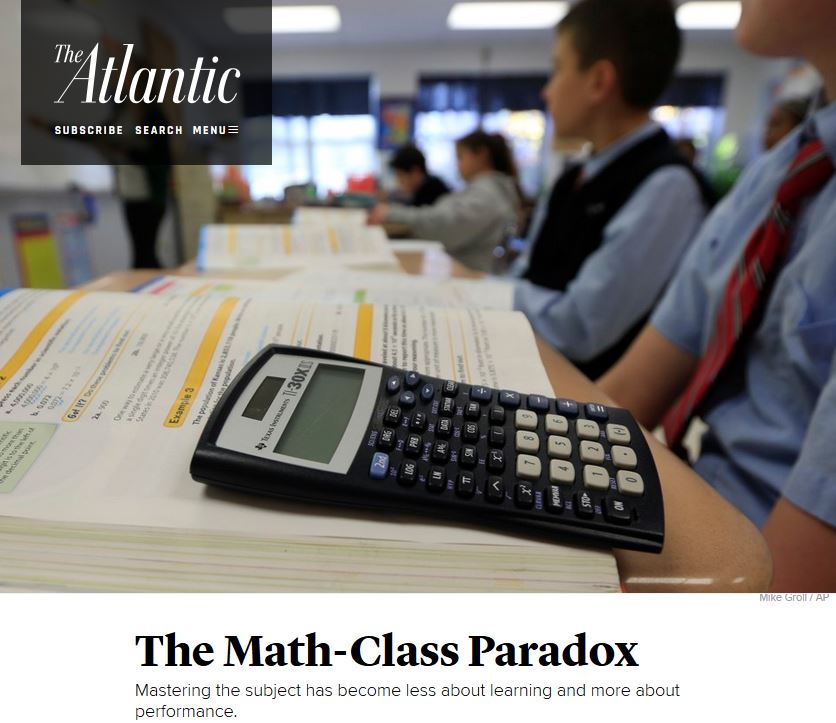 The Math-Class Paradox by Jo Boaler
The Atlantic, December 31, 2015

In a recent article from The Atlantic, award winning author and educator Dr. Jo Boaler summarizes and extends her new book, Mathematical Mindsets (forward by Carol Dweck). In a relevant and timely manner, she highlights a problem many would find familiar: too many students complain that they are bad at math, that they hate math, and that they are afraid of it. Students are tested frequently in their math classes, speed is often rewarded over depth of thought, and typically there is only one right answer. As such, there is a fundamental disconnect between how students learn to do math in school, and what mathematicians actually do in their careers. Where mathematicians might describe math as a search for meaning and patterns, with a focus on deep learning and reasoning, students in school describe math as a test of speed, accuracy, and performance as they sprint through a series of disconnected lessons. Consequently, students are taught to have a fixed math mindset. Instead, Boaler suggests, educators need to continue to move away from traditional math curriculum and embrace a pedagogy that values reasoning over speed and accuracy. Though this article mentions the Common Core by name, Boaler's work is of immediate applicability and importance to educators in independent schools who are much less constrained in their approach to curriculum and classroom practices than colleagues in the public school system.