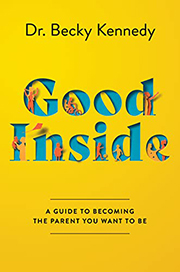 They Must First Feel Understood

Good Inside: A Guide to Becoming the Parent You Want to Be by Dr. Becky Kennedy
HarperCollins, September 13, 2022

Many child-rearing frameworks focus on changing a child’s behavior through the use of rewards, punishments, shame, or ignoration. Based on her experiences as a parent and a clinical psychologist, Dr. Becky Kennedy uncovers something else: while often successful in changing behaviors, these default strategies fail to understand the root causes of behaviors and can harm children's relationships with adults. Kennedy’s approach is grounded in the belief that all people are good inside and that adults must understand the emotions behind kids’ behaviors before attempting to change them. For example, Kennedy writes about a hypothetical situation in which a child yells at their parents for leaving them at home with a babysitter. Instead of ignoring the child or telling them that their words “Make me sad,” Kennedy advocates for first recognizing a child's emotions: “Wow, those are big words, let me take a breath…I hear how upset you are. Tell me more." She believes that adults must set firm boundaries with children; for a child to respect these boundaries, though, they must first feel understood. While Dr. Kennedy’s book was written specifically for parents, the strategies she explores would be effective for educators of students of all ages and would assist them in setting clear standards for behavior while building connections within their schools and classrooms.