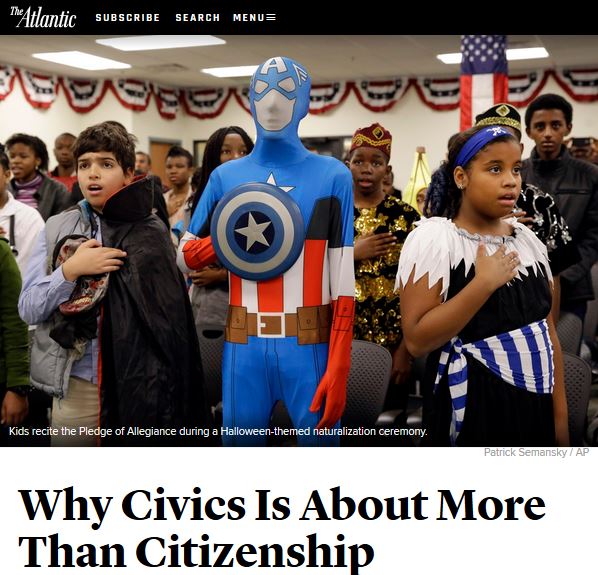 What Do We Know?

Why Civics Is About More Than Citizenship by Alia Wong
Atlantic, September 17, 2015

Who is the Chief Justice of the United States now? What is one power of the federal government? Ten such questions, from a pool of one hundred, are asked of immigrants applying to become naturalized U.S. citizens. Eight states now require high school students to pass some version of this test in order to graduate. Spearheading the effort is the Joe Foss Institute, an Arizona nonprofit, that is hoping to bring this requirement to all 50 states by 2017. Opponents regard the test, a multiple choice test about facts, as an empty symbolic gesture that sends a message that a multiple-choice exam is the key to being a successful citizen. And while the Joe Foss Institute claims to be bipartisan, others see it as a right leaning organization with an all-white board and executive leadership. Still, the evidence points to a failure of schools to realize their historic mission of preparing citizens capable of participating in a democracy. Independent schools would likely be exempt from state requirements for the citizenship test, but the schools may want to seize the opportunity to lead. The absence of bureaucratic entanglements allows independent schools to develop a meaningful test and follow students after graduation to assess civic engagement and voting participation. Establishing this kind of requirement, as a sector, could set a high bar for all schools to consider.