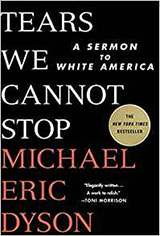 Presented in the form of a worship service by ordained minister and Georgetown University sociology professor Michael Eric Dyson, Tears We Cannot Stop challenges a white audience to acknowledge a “willful denial” of racial injustice in America. Going beyond merely laying out all the privileges that come with whiteness, Dyson addresses “white fragility,” the inability for many white people to tolerate uncomfortable discussions of race. Dyson explains: “White fragility is a will to innocence that serves to bury the violence it sits on top of.” Rather than shutting down stressful race-related dialogue, he asks that his readers lean-in to the discomfort, recognizing complicity in an unjust system, and move toward collective engagement. Participation in protests and rallies is essential, as well as making reparation, which Dyson refers to as a “black tax.” He argues that black Americans are already paying this tax and that supporting black scholarships and hiring black employees and paying them more than their white counterparts are just a few of the concrete ways to offset the cost. In the end, Dyson calls for greater empathy from white America and a more educated, reflective, and active response from white allies and educators fighting for racial justice.