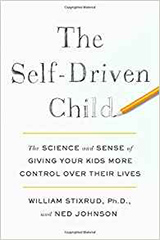 Of Note: Steering Towards a Healthy Middle Ground

The Self-Driven Child: The Science and Sense of Giving Your Kids More Control Over Their Lives by William Stixrud, PhD, and Ned Johnson
Viking, February 13, 2018

In their book The Self-Driven Child: The Science and Sense of Giving Your Kids More Control Over Their Lives," William Stixrud and Ned Johnson argue that our society has taken agency away from children and adolescents. With the best of intentions, parents and educators have sought to protect children, but in the process we have reduced the ability of our youth to make their own decisions and make (and learn from) their own mistakes. As a result, we have been making it harder for students to become independent, flexible, and resilient adults. While we have wanted to assure that life for teens is easier and safer, we have instead increased stress levels by removing a sense of control. This increased stress interferes with sleep, learning, and happiness. Stixrud is a neuropsychologist and Johnson runs a tutoring service. In their book, they draw on their experiences, case studies, and research into neuroscience and developmental psychology. The authors argue that there is a healthy middle ground when it comes to stress. It can be age-appropriate and allow for and encourage growth. Each chapter contains practical advice on how to implement changes, making this an essential read for parents as well as educators.

Swiss Cheese Privacy? What We Teach and What We Do

What Parents and Teachers Should Note from Mark Zuckerberg’s Senate Testimony by Jenny Abamu and Tina Nazerian
EdSurge News,  April 10, 2018

Since the widespread adoption and use of social networking, its impact on society in general and children in particular has been a topic of considerable conversation and concern. Ari Pinkus of the American Communities Project reported on April 9, 2018, that across diverse US populations and regions, concerns about online privacy are a common denominator. Facebook’s recent admission that Cambridge Analytics mined personal data from 87 million of its over 2 billion users for the purpose of creating targeted political ads has only amplified the conversation, especially as it pertains to K-12 education. Although at the outset, K-12 schools were reluctant to use social networking apps, many K-12 schools now embrace and even promote social networking platforms in an effort to streamline communication across constituencies. In their EdSurge news article, "What Parents and Teachers Should Note from Mark Zuckerberg’s Senate Testimony," Jenny Abamu and Tina Nazerian highlight key takeaways related to K-12 education from Zuckerberg’s April 10-11 testimony. Specifically, Facebook’s Messenger app, which is accessible by children ages 13 and older, does not protect those children from third party data mining apps. According to Sarah Schwartz of Education Week, however, despite data-privacy worries, schools are by and large choosing not to join the movement to #deleteFacebook. In light of that fact, the Consortium for School Networking and the National Education Policy Center recommend that schools take a close look at how they are using social networking and take steps to avoid pressuring students to use Facebook in order to experience or complete required school work. Schools are encouraged to provide alternate modes of communication, too, for parents who may not wish to use Facebook or other popular social networking sites. Teaching students about digital citizenship, while crucial, can only go so far if schools themselves ask students to engage with technology that does not protect their privacy, what Steve Smith, chief information officer for the Cambridge Public Schools in Massachusetts, calls "swiss cheese privacy." 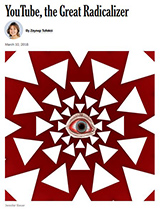 In this op-ed, noted technology sociologist Zeynep Tufekci (whose excellent book, Twitter and Tear Gas, is a must-read) wades into the fever swamps of YouTube to argue that the site “may be one of the most powerful radicalizing instruments of the 21st century.” Tufekci points to the use of recommending algorithms, which operate under the assumption that “people are drawn to content that is more extreme than what they started with — or to incendiary content in general” and use that principle to keep viewers’ eyes on the site and, importantly, on the advertisements that YouTube (and its corporate owner, Google) rely on to maintain their business model. Tufecki puts it bluntly: “YouTube leads viewers down a rabbit hole of extremism, while Google racks up the ad sales.” Tufekci goes on to argue that the “situation is especially dangerous given how many people — especially young people — turn to YouTube for information,” an observation familiar to those of us working in schools. It is imperative that educators and school leaders better understand how YouTube and other recommending algorithms influence our students’ pursuit of knowledge.

We know from the opening lines of this important collection of essays that, in the reading of them, we will be changed. The editors bring us inside immediately, sharing their process and the guiding, essential questions that became the call for contributors to this special issue of the Bank Street Occasional Papers series. They asked for stories.  And they chose those that made visible some answers to these questions: How are Black and Brown girls and women labeled (as unintelligent, poor, fat, loud, wild, or “fast"— or as smart, pretty, quiet, sweet, palatable, or exceptional)? How are schooling and the people inside schools violent toward Black and Brown girls and women? The brief, critical essays that make up this collection are written by Black and Brown women scholars, educators and activists. Their narratives are grounded and informed accounts of lived experiences of violences, micro-and macro-aggressions, and marginalizations.  Their voices foster what the collection hopes to provoke – exposure, interruption, elimination, and reconstruction of systems of injustice and oppression.  With unusual boldness and exceptional care, the editors take us toward their final question: How do we challenge and destabilize white, patriarchal norms and values so that the onus is not on Black and Brown girls to adapt to systems of oppression? How can we enlist white people and people who can claim white privilege into this project?  There is depth in their answers.

In her article, "I've never experienced white guilt," Sarah Webb's insight and clarity as an educated Black woman navigating the world of privilege gives the reader a clear-headed and practical approach to situations many educators of color face in predominantly white classrooms. She opens with an anecdote that rings true: white students asking a teacher of color to define "white guilt" for her, which is virtually impossible from the standpoint of the instructor. However, Webb lays out four steps to cracking open and shedding light upon students’ capacity to unpack their own privilege, using her unique position as a guiding force. While the author cautions that there is no easy fix to these teachable moments of discomfort, the only way around them is through them. By anticipating the biases of those in the classroom, bringing in white teachers to facilitate discussions, being transparent about the role that identity plays in every aspect of learning, and depersonalizing the process, Webb suggests that it is possible for educators of color to support white students in discovering, and dismantling, systems of privilege and oppression from within. 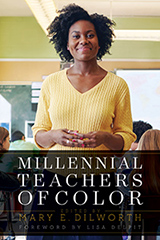 Millennials are unique: they are the largest living generation, the best educated generation, the most culturally and racially diverse generation, and they are drawn to teaching to improve equity and social justice. Of the 75.3 million millennials in the United States, approximately 20% of them are entering the teaching profession, yet teachers of color represent only 18% of the workforce. Millennial Teachers of Color, edited by Mary E. Dilworth, is a collection of the latest academic research illuminating the experiences and trends of millennial teachers of color, from longitudinal research on teachers’ experiences, to examination of a pedagogy of teacher activism as it relates to teacher development. While researchers here are concerned with recruitment and retention of teachers of color in the public system, the findings are important for independent school leaders, too. Whether it is an interest in closing the "gap between ‘wokeness’ and their institutional practices" or attending to the next generation of teachers, this research is valuable. Insight into the physical and professional isolation that teachers of color experience in white normative education spaces offers lessons in building institutional equity, changing policy, and designing professional development. 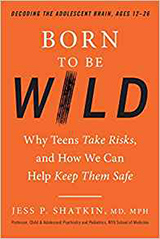 Born to Be Wild: Why Teens Take Risks, and How We Can Help Keep Them Safe
by Jess P. Shatkin
TarcherPerigee, October 3, 2017

‍The most common way that schools partner with parents to help teens counter their natural propensity to engage in risky behavior is to warn them of the potential consequences. Most drug and alcohol education or sex education programs have the underlying assumption that teenagers underestimate the risks they face. In Born to Be Wild, Dr. Jess Shatkin argues that this approach does not align with current research and neuroscience as he cites evidence that teens actually tend to overestimate the dangers they face from risky behavior. The problems instead lie in primarily peer effects and a lack of rules of thumb for how to handle risky situations since teens do not have a bank of experiences from which to draw. As Dr. Shatkin argues, "the more we debate a decision, like an adolescent does, the more likely we are to rationalize any given risky behavior." Though the book does not provide quick and easy solutions, the final three chapters focus on the deep and meaningful character education work that parents, schools, and the wider society can utilize to support students as they navigate adolescence.