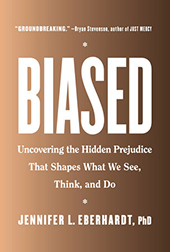 Biased: Uncovering the Hidden Prejudice That Shapes What We See, Think and Do by Jennifer Eberhardt
Penguin Random House, March 26, 2019

A black boy entering eighth grade is told by a school administrator to cut the blond tips from his hair, or serve detention. The school handbook clearly states that students may not wear their hair dyed or colored, and he has clearly broken that rule. However, so have many of his white classmates. The difference is that his hair was noticed by the dean, and theirs was not. In Biased: Uncovering the Hidden Prejudice That Shapes What We See, Think and Do, implicit bias expert and Stanford University professor Dr. Jennifer L. Eberhardt correctly identifies this as an episode of unconscious racial bias at work. She then describes the personal challenge she undertook in addressing the issue, as the boy facing discipline was her own son. Although primarily concerned with the devastating role that implicit bias plays in American law enforcement and criminal justice, Dr. Eberhardt's book has wide-ranging relevance to educators as well. "Black students are nearly four times as likely to be suspended from school as their white peers," she reveals, citing a study conducted by the U.S. Office for Civil Rights involving more than 96,000 K-12 public schools. "That’s a gap that can’t be explained by racial differences in student behavior or socioeconomic status. The disparities, in part, are driven by choices made by teachers or administrators in subjective cases." Dr. Eberhardt's use of data sheds incontrovertible light on the impact of implicit bias on even the youngest children, putting pressure on teachers and administrators to do much more than acknowledge their own unexamined habits and biased enforcement of school policies, although acknowledgment is the first step. 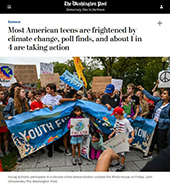 On Their Minds, Not In Their Classrooms

Most American teens are frightened by climate change, poll finds, and about 1 in 4 are taking action by Sarah Kaplan and Emily Guskin
The Washington Post, September 16, 2019

This article summarizes research from a Washington Post-Kaiser Family Foundation survey of teens’ perceptions of climate change. In general, teens report higher levels of concern about climate change than adults, chafing at adults’ perceptions that they are alarmist. At the same time, although many teens express worries about how climate change will affect their futures, "fewer than half say they’ve taken action to reduce their own carbon footprints." There also seems to be a growing awareness of environmental justice – the idea that environmental harm is often distributed along racial or class lines – with "black and Hispanic teens express[ing] a greater sense of urgency around climate change." Most urgently for educators, few teens report learning much about climate change in their schools; "fourteen percent say they learned 'a lot' about the subject, down from 25% in 2010," according to research from the Yale Project on Climate Change. Encouragingly, approximately 25% of American teens have participated in climate change activism, which the authors claim as "remarkable levels of activism for a group that has not yet achieved voting age." And yet it is clear that schools need to do more to teach students about the scale of and potential solutions to this mounting global crisis. 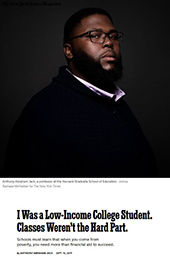 Drawing from his experience as a first-generation college student attending Amherst College, Anthony Abraham Jack illustrates the difficulties that low-income students face when they arrive on campuses across the country. Students from disadvantaged backgrounds must deal with the twin challenges of navigating unfamiliar waters – deans’ office hours or invitations to join professors for coffee – along with those all too familiar – managing food insecurity or difficult news from back home. The resulting penalty these students must pay in terms of time and energy, both physical and emotional, requires that institutions rise to meet their needs. Though Jack describes his time in post-secondary institutions, his insight is no less applicable to independent schools that admit low-income families. While students in PreK-12 settings may not be managing their family’s SNAP benefits (though some, perhaps, are), there are, for many, enormous obstacles that must be overcome before learning can begin. Jack’s article suggests that independent schools must first recognize the specific needs of students from disadvantaged backgrounds. Once they have done so, an institutional prerogative exists to creatively problem solve, alongside those students and their families, ways to alleviate disadvantage created by those needs. 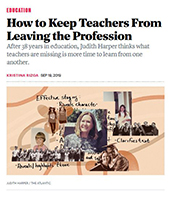 How to Keep Teachers From Leaving the Profession by Kristina Rizga
The Atlantic, September 19, 2019

In this 7th article in the series, “On Teaching” in The Atlantic, Kristina Rizga describes the myriad underlying causes of the impending teacher shortage that will affect both public and independent schools in the next five years. In 1998, the average teacher had fifteen years of experience; now the average teacher has only three. Rizga looks at decades of research that points to the need for on-the-job training with effective peer coaches and mentor teachers. This kind of collaboration is not only vital for helping teachers to hone their skills, but is also a critical factor in helping teachers to remain in education as a career. The Finnish and Japanese systems build into teaching schedules ample time for teachers to collaborate, to create curriculum, to study student work in teams, and to observe other teachers. Teachers cite that, more than any other professional development, these activities promote the most change in their pedagogy while improving learning in their classrooms. Yet, American schools design daily schedules and yearly calendars that leave virtually no time for teachers to work together. This article is another reminder, perhaps especially to independent schools where the teacher-student relationship is prized greatly, that peer collaboration among faculty should also be at the heart of any great school. 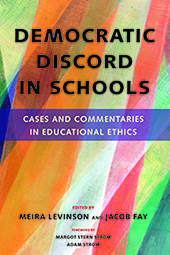 ‍Democratic Discord in Schools feels like a book that came along at just the right time. Organizing around eight case studies, Meira Levinson and Jacob Fay weave together expert commentary from scholars, policy makers, and teachers to help us consider how to engage in effective civic discourse. The cases center on contemporary issues including walkouts, student surveillance in the digital age, classroom discussion of controversial topics, the rollout of culturally responsive curricula, and academic freedom of teachers. Each concisely described case is followed by six commentaries with surprising breadth including international perspectives and pieces from secondary school students. In this sense, Democratic Discord lives up to its promise as readers will find themselves nodding in agreement with some contributors and disagreeing with others. The concluding chapter, “Educating for Civic Renewal,” leaves readers in a positive space, asking us to use the text for democratic engagement through discussion with faculty, parents, school boards, and students. Lest the thought of discussion on challenging topics asks too much, Levinson and Fay provide a thoughtful discussion protocol and a pep talk to stick with it even when the going gets rough. 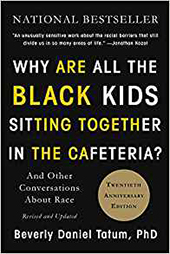 A Stirring Call to Action, Then and Now

Why Are All the Black Kids Sitting Together in the Cafeteria? And Other Conversations About Race by Beverly Daniel Tatum, PhD
Basic Books, September 1, 2017

Writing as a psychologist, Beverly Daniel Tatum set out in 1997 to answer a question usually posed to her by white teachers: “Why are all the black kids sitting together in the cafeteria?” The book, extensively revised and updated for this 20th-anniversary edition, notes that the question is still commonly asked because so many teachers do not have a basic understanding of racial-ethnic-cultural identity (REC identity). To improve our racial literacy as educators, Tatum walks readers through the developmental arc of REC identity from early childhood through adulthood and across racial groups. Tatum shows how stages of REC identity development are fairly predictable, and for students of color in white-majority schools, often include a stage of strong same-group identity in adolescence. There are chapters on the development of white identity and multiracial identity as well as an emphasis on intersectionality. The final chapter is an urgent call to cross-racial dialogue, especially in schools, and the author asks all anti-racist educators to engage in this work deeply and personally. Tatum’s work was groundbreaking in the 90s, and this revised edition is a stirring call to action that should be required reading for us all. 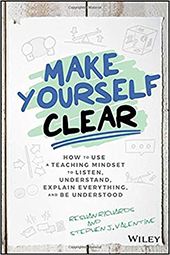 Make Yourself Clear: How to Use a Teaching Mindset to Listen, Understand, Explain Everything, and Be Understood by Reshan Richards and Stephen J. Valentine
Wiley, May 7, 2019

How might approaching business through the lens of a teacher help leaders to create a culture that will thrive in an ever-changing and uncertain future? In their new book, Make Yourself Clear, Reshan Richards and Stephen J. Valentine analyze the ways in which applying teaching and learning practices can benefit leaders in business settings. While written as a guide for those outside the classroom, this book proves to be a meaningful reminder as well to those in the education world: teaching is a uniquely important skill. Richards and Valentine highlight the value of interpersonal communication in a world that is increasingly lacking personal connection. Using strategies essential to the classroom, they highlight the significance of connections rooted in three basic principles: authenticity, immediacy, and delight. Informed by years of classroom experience, this guide is useful to educators as it offers research on, and anecdotal examples of, how to use teacherly practices to improve communication in any setting. Make Yourself Clear celebrates the skillset of all teacher leaders and will give readers a fresh perspective on their roles in and out of the classroom. 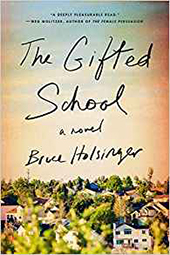 Set in the fictional Front Range city of Crystal, Colorado, The Gifted School depicts four young couples vying for their children’s admission to a newly formed public school for gifted students, and their efforts to advantage their acceptance. Holsinger explores the vicarious ambitions that parents may hold for their children, the desperate lengths that some will go to realize them, and the devastating consequences that such over-involved parenting can have on children, friendships, and marriages. The Gifted School provides a literary complement to the real-world extremes of modern parenting as demonstrated by the recent “Operation Varsity Blues” college admissions scandal. The novel explores meritocracy, middle-age, privilege, parenting styles, and the challenging, complex dynamics of marriage and family that will most likely be familiar to many educators.