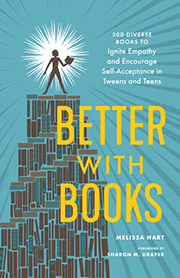 Books, said Franz Kafka, can be "the axe for the frozen sea within us," illuminating the humanity of others and reminding us of our own. In Melissa Hart's new collection of suggested titles for young adult readers, Better With Books: 500 Diverse Books to Ignite Empathy and Encourage Self-Acceptance in Tweens and Teens, she organizes reading lists into a number of different categories such as adoption and foster care; body image; immigration; learning differences; LGBTQIA+ youth; mental health; environmentalism; physical disability; poverty and homelessness; race and ethnicity; and religion and spirituality. Each chapter includes an introduction in which Hart briefly explains her book choices before listing a number of recommendations along with brief summaries of what the books are about. Hart is an omnivore, recommending titles from different genres, but she is especially appreciative of fiction. "Fiction," she writes in a description of Angie Thomas' The Hate U Give, "is the original virtual reality; a well-written novel makes us feel like we're right there in the scene, which can raise consciousness and save lives." Hart's book also includes an appendix of go-to resources for parents, teachers, librarians, and young readers. 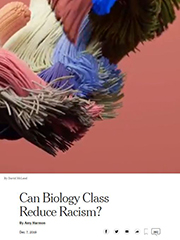 To counter the destructive "race-science" of the first half of the twentieth century, many biology teachers continue to avoid any mention of the genetics of race. At both the secondary and post-secondary levels, science teachers have largely left all discussions of race to social science classes, which in turn describe race as a purely cultural construct. Recently, however, some researchers are considering ways of teaching "complex genetics" in order to counter the sticky misperceptions that students have about the relationship between genetics and race. With grants from the National Science Foundation, these researchers have begun to train biology teachers to surface student misperceptions, facilitate the charged discussions that can potentially feel unsafe to students, and deliver content that helps complicate student understanding of the genetics of racial differences. The goal is for students to see the highly intricate web of relationships between a person's genome and their environment as well as the ways that systemic racism contributes to outcomes for all groups. This article could serve as an excellent launch for interdisciplinary work between science and humanities departments. More important, it can provide an inspiration for biology teachers to courageously and directly confront the questions students have about this difficult topic – one which remains stubbornly salient in American culture.

"The Miseducation of the American Boy" by Peggy Orenstein
The Atlantic, January 1, 2020

For two decades Peggy Orenstein has been writing compellingly about gender, and her latest piece in The Atlantic is a worthy synthesis and call to action. Boys, she explains, "are relegated to an impoverished emotional landscape," "unable to identify or express their own emotions, and ill-equipped to form caring, lasting adult relationships." Quoting boys from numerous recent interviews, Orenstein notes the tragedy and often the ironies of "bro culture" and "the dark underbelly of male-dominated enclaves" wherein many boys are longing for a different paradigm of masculinity. They have learned to use "weaponized" language to talk about sex, to disregard feelings, and to be silent "in the face of cruelty or sexism." While girls draw strength from the conversation and culture around feminism, she explains, seeing "many ways to be a girl," there is no equivalent for boys who describe "just one narrow route to successful masculinity." Thankfully, Orenstein describes an accessible and attainable way forward for educators (and everyone in society, really): "engage young men in authentic, long-overdue conversations about gender and intimacy," "emphasize emotional flexibility" in how we teach and raise them, and "purposefully and repeatedly broaden the masculine repertoire for dealing with disappointment, anger, [and] desire." While the content of this article won't surprise most readers, it is nonetheless essential reading as a powerful contemporary overview of a challenge at the heart of education and society more broadly.

Despite suggestions or claims to the contrary, there is yet no standardized curriculum in the United States of America. Depending on where students live and attend school, they are taught different material, given different assessments, and expected to know how to do slightly or significantly different things. It is startling to see, and not just to suspect, that what students learn in school is so deeply dependent on their geo-political contexts. In her dynamic New York Times article, "Two States. Eight Textbooks. Two American Stories," Dana Goldstein brings this reality to life by laying bare some of the precise curricular differences in social studies textbooks in use today. Focusing her analysis on Texas and California, Goldstein found that the information within eight textbooks differed in hundreds of ways, "some subtle, some extensive," and all reflective of "the nation's deepest partisan divides." As an additional point of interest, Goldstein explains the process by which a textbook is customized for state and district-specific audiences. McGraw-Hill, Pearson, and other textbook publishers are apparently caught in the crosshairs as individual states make specific requests – for example, California asked for added language about the Second Amendment and gun control and Texas asked for language doubting the quality of Harlem Renaissance literature. It's a fact worthy of attention and discussion: on subjects such as race, immigration, economics, sexuality, and gender, students are exposed to revised narratives depending on where they attend school. 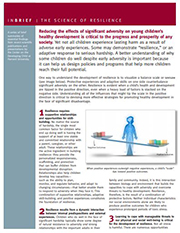 A Difference that Lasts

In this newsletter, the Harvard Center for the Developing Child releases new videos and resources for parents, educators, and policy makers to help them to re-examine and commit to building resilience in evidence-based ways for preschool and school-age children. Three 3-minute videos gather the data, answer the questions, and offer the encouragement to take a deeper look at what we are doing. They promote maximum resilience for children, expanding their emotional toolkits when challenges ranging from everyday disappointments to life-changing crisis levels occur. What is strongest here is the simplicity of the message and the knowledge base behind that clarity. These three videos and their accompanying resources carry two messages. First, we can help children to have adaptive responses to even serious hardships. And second, to be the teachers and parents we want to be, we will need to use the science of resilience intentionally and successfully. A strong starting point for this intention, these small but powerful videos could inspire discussion in staff meetings or parent education gatherings, and lead to actions that make the kind of difference that lasts in the lives of our students. 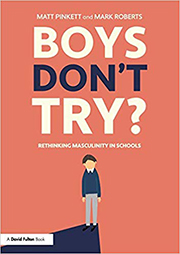 The heart of Boys Don't Try? lies in redefining masculinity in schools to foster a culture in which all gender identities can perform to their potential. Authors Matt Pinkett and Mark Roberts examine roadblocks that plague adolescent males, stating the belief that "when boys struggle educationally, it also has a direct, adverse effect on girls." The text also challenges common myths, including the assumption that competition is a healthy engagement tool, that hormones cause bad behavior, and that avoidance of hard work is based on incapability, clarifying instead that "through not trying their hardest, pupils avoid injury to their perception of self." In response to these challenges, Boys Don't Try? offers solutions, paired with relevant anecdotes and research, that range from institutional work to actionable tips designed to gradually impact cultural change from within the classroom. By providing practical recommendations for rethinking the ways that we normalize gender values, the chapters serve as a roadmap toward helping male students maximize their academic selves. Boys Don't Try? ultimately warns that the sexual maturity, academic confidence, and mental wellbeing of all students is at stake if male-specific education isn't reimagined. 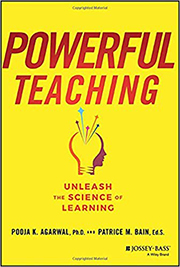 The work of Dr. Pooja Agarwal and Ms. Patrice Bain represents a "long-overdue opportunity to bridge the gap between learning in the classroom and learning in the lab." Citing extensive cognitive science research as well as years of practical classroom experience, Powerful Teaching highlights four "Power Tools" that can easily increase student retention and engagement: Retrieval Practice, Spacing, Interleaving, and Feedback-Driven Metacognition. The accompanying website provides templates of materials referenced in the book, allowing teachers to quickly and easily implement these tools. The authors creatively use the Power Tools throughout the book to help readers retain their message. Agarwal and Bain take care to show that these tools tackle timely issues and teacher concerns. For example, the book notes that student "anxiety decreases when retrieval is a standard part of every lesson and unit, is low-stakes or no-stakes, and may have no correct answers at all." An entire chapter is devoted to potential teacher difficulties such as increased planning time or loss of lesson content, "using Power Tools to tackle challenges, not add to them." This book provides both research-based justification for its claims and practical activities that can be implemented tomorrow, making it invaluable for any teacher. 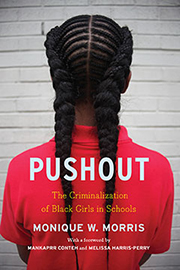 In many of America's schools, the impact of discrimination towards Black girls goes further than micro-aggressions and stereotype threat. Their very lives are at stake because the larger perception of Black girls prevents them from being seen as children in need of support in a challenging learning environment. Researcher Monique W. Morris' book Pushout gives voice to the voiceless victims of the convergence of racism, sexism, and classism in America. According to Morris, educators in many schools respond negatively when marginalized students speak up for themselves or for their larger community. Rather than being seen as potential leaders who can be groomed and equipped with the necessary skills to become champions for a cause, they are seen as trouble-makers who aren't worth the investment of time and resources. There's a common misconception that the damage done to disadvantaged communities is somehow localized, but over time, it's becoming more and more apparent that the destruction is welded on society as a whole. For example, we can only imagine what our society would be like without the likes of Oprah Winfrey and Maya Angelou – two figures whose early life experiences mirrored those of the sexual abuse and neglect outlined in Morris' Pushout.