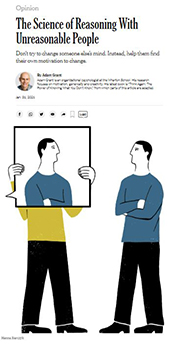 Of Note: Opening and Perhaps Changing

The Science of Reasoning with Unreasonable People by Adam Grant
The New York Times, January 31, 2021

When Adam Grant offers an opinion on reasoning with unreasonable people, readers who  know and trust his work are ready and willing to listen. But here, Grant wants to draw in both people who agree with and those on the other side of any point he has made. He does this with a promise that there is a science, not only an art, to dealing with those we see as stubborn, unmovable, and impossible to persuade. As educators, we may be particularly devoted to the idea that we can help others think and learn. Grant points us toward an additional skill set that our times require us to teach – the capacity to re-think and to unlearn. He demonstrates that science has shown that we are extremely unlikely to change minds that are not motivated to open. Then he shows us the significant value in asking open-ended questions of those with whom we disagree, listening carefully, and seeking truly to understand the nuances of how they have constructed their worldviews. Grant’s newest book, Think Again: The Power of Knowing What You Don’t Know, expands the message of this short article. In both, Grant uses the very skills he invites us to apply to others, while choosing courage over comfort in the science of opening, and perhaps changing, minds. 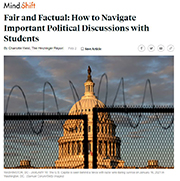 Fair and Factual: How to Navigate Important Political Discussions with Students by Charlotte West
KQED, February 2, 2021

As the events of January 6th reverberated across the country, many teachersfound themselves confronted with the task of helping students understand what had just unfolded. Resources from Facing History, PBS, Learning for Justice, and The New York Times Learning Network appeared quickly, helping teachers work with students to unpack history as it happened. The events once again highlighted issues of teacher neutrality and how to approach contentious political developments in the classroom. “Just another day live teaching an attempted coup from my dining room,” wrote AP Government teacher Joel Snyder, highlighting the further complexity of meeting this moment via remote schooling. Writing about a month after the event for KQED, Charlotte West uses teachers’ responses to the riots to reflect on larger issues of neutrality and truth-telling in the classroom. Noting that “it’s impossible to remove politics from the classroom because teaching itself is a political act,” West offers some useful strategies and reflections for teachers looking to lean into the discomfort of tackling controversial political topics. She highlights the research of Wayne Journell, whose findings show that “students don't care where their teachers stand politically as long as they feel like they aren’t being pressured to think a certain way” and even offers support for the view that “teachers disclosing their beliefs can help students learn to think critically.” As teachers and schools attempt to help students process the current moment while setting them up to become fully empowered democratic citizens in the future, approaches that center critical thinking, fact-finding, and honesty become even more necessary.Fair and Factual: How to Navigate Important Political Discussions with Students by Charlotte West
KQED, February 2, 2021

To Remove These Mascots

For anti-racist educators seeking resources for teaching about the negative stereotypes perpetuated by school mascots that refer to Native Peoples in derogatory ways, the National Congress of American Indians (NCAI) website provides a wealth of information and outlines powerfully the rationale for change. Along with a clear history of the struggle to remove these mascots, the resource page provides brief videos made by Native Americans to use with students from elementary school through college. Additionally, it provides links to research that underscores and reveals the social, psychological, and cultural harm to indigenous people caused by these mascots. The NCAI partners with the group “Change the Mascot,” which can offer students ways to turn their awareness into action to rid American institutions of racist iconography. Further, some secondary schools may be confronting racist imagery about indigenous people at the center of their own athletic and mascot traditions, and this website offers lists of schools that have made this long overdue and necessary change. 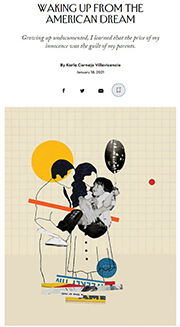 Bad Dream by Karla Cornejo Villavicencio
The New Yorker, January 25, 2021
Published online as "Waking Up from the American Dream"

In her New Yorker article, “Bad Dream,” Karla Cornejo Villavicencio writes powerfully from the perspective of a first-generation immigrant who developed a voice and an identity by moving through the uniquely American and transitional spaces of the undocumented, those on DACA, and permanent residency. Her experience, Villavicencio explains, created a complex relationship between herself and her parents who sacrificed in known and unknown ways to bring her to the United States. She writes that immigrant parents “give us a better life, and we spend the rest of that life figuring out how much of our flesh will pay off the debt.” Throughout her essay, Villavicencio paints a vivid picture of her parents and her heartfelt, though complicated, bond to them. At five, she joined them in the States and discovered that far from “tony expats,” they were earning what they could as undocumented workers delivering food and sewing for long hours, seven days a week. One of the ways Villavicencio paid her “debt” early on was by translating and interpreting for her parents. Like many other high school students, she encountered The Great Gatsby and the idea of the American Dream for the first time and understood that different from Gatsby who animated his own dreams, “we were Dreamers because our parents had dreams.” The dreams of her parents were not just deferred for themselves, but denied; despite the fact that she was high school valedictorian and went to Harvard, her parents remain “poor and undocumented,” aging without “dignity” and unable to retire. Villavicencio’s story urges educators committed to creating equitable classrooms to listen and look out for this perspective and to consider their practices and pedagogy, including the teaching of canonical literature like The Great Gatsby. 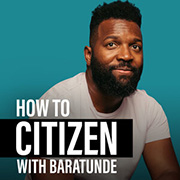 Citizen is a Verb

How to Citizen with Baratunde by Baratunde Thurston
August 20, 2020

The podcast "How To Citizen with Baratunde," is a platform where Baratunde Thurston reimagines “citizen” as a verb. In an interview with NPR, Thurston commented, “I think we've had a very narrow definition of citizen as a legal status, as some privilege you're born into rather than a set of actions, a way to be, things to do that involve really participating in society.” Thurston believes that we should all be invested in grappling with our local and national governments’ issues and the political process. Today, while we witness two pandemics – COVID and the racial injustice in our country – many educators are trying to find ways to best support their students and educate them about the reality of the political issues of our time. In his podcast, Thurston speaks with guests, including students, about how they have become agents of change in their communities. He engages in topics such as policing, food deserts, corporate power, segregation, and discrimination. He then provides resources for listeners and shares questions to promote reflection. The podcast offers useful perspective and tools for teachers to include for middle and upper school students, helping them to develop the critical skills they will need to be part of, and lead, change. 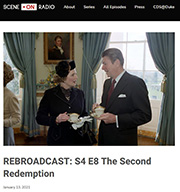 The Duke University Center for Documentary Studies podcast Scene on Radio recently rebroadcast a highly relevant episode from April 2020. Part of a season entitled “The Land That Never Has Been Yet,” which takes a critical look at the gap between democratic ideals and the history of U.S. democracy, “The Second Redemption” locates the 1950s as the birth of the anti-democracy right-wing movement that spread its wings under President Trump. This history may cause appropriate discomfort for educators in independent schools, as hosts John Biewen and Chenjerai Kumanyika describe the privatization of schools in the South as the beginning of a systematic push to erode public trust in government and, indeed, in democracy itself – especially because a more fully democratic society presents a threat to white supremacy. Featuring debates on the meanings of libertarianism, neoliberalism, and social justice, this episode correctly predicted the battle over pandemic-era voting access during the 2020 election, and provides valuable historical background for educators looking to help students understand the power dynamics that led to the damaging post-election battle over democracy itself. 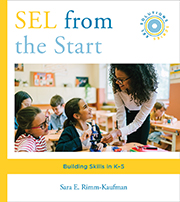 Tools Every Teacher Can Use

SEL From the Start is a gem of a resource for teachers new to Social and Emotional Learning, as well as for those educators looking to deepen their current practices. Written for elementary school teachers, Rimm-Kaufman’s book provides practical advice, resources, and insights into what current research has to say. The book’s upbeat, conversational tone makes it an easy read for busy faculty members, and it provides a roadmap for how to start out the school year. Rimm-Kaufman lays out her advice for helping students to develop prosocial and productive behaviors by sequencing the skill-building in SEL, starting with creating classroom norms and progressing through all the skills needed for more complex social tasks like resolving conflict.  She uses refreshingly direct language about racial and social inequality, connecting DEI work to the skills SEL brings to the table. Interspersed throughout the book are many concrete ideas for building social awareness in all students. “My goal has been to raise your expectations about what is possible in your classroom,” (p. 158) Rimm-Kaufman reveals at the end of the book, and she has met that goal in providing tools every teacher can use.