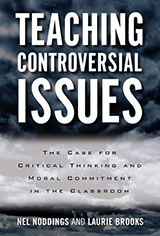 In their latest book, Nel Noddings and Laurie Brooks argue that effective critical thinking in the classroom must be guided by moral commitment. The authors challenge assumptions (such as “knowledge is virtue”) to critically examine moral and political thought. They frame their work with a primer on the sources of morality within the educational system, and in the process, question the type of citizens teachers seek to develop, highlighting too the importance of communication within a democracy and the need for open discussion of conflicting ideas. They then provide guidance on topics relevant to students today, ranging from gender and equality to global economic and environmental issues. The need for critical thinking in our classrooms, especially in our current political climate, is more urgent than ever. Through open discussions of controversial issues, teachers can help it to flourish. Noddings and Brooks dig, prod, and push, suggesting the kind of classroom our students and futures deserve.

How the Systemic Segregation of Schools is Maintained by School Choices by Nikole Hannah-Jones
NPREd, January 16, 2017

In an interview and article for NPR, “How the Systemic Segregation of Schools is Maintained by School Choices,” Nikole Hannah-Jones shares a personal reflection on the topic of school choice. She speaks candidly about her decision to enroll her daughter in the public education system even though she has the means to enroll her in a private school. Hannah-Jones’ decision to do so was based on the fact that she didn’t want “to contribute to the inequality that [she writes] about.” She argues that when families decide to pull their kids out of public schools, they declare openly that the system is not good enough for their children. As educators in independent schools, it falls on us to think carefully about the public purpose of our institutions. For example, we might ask ourselves how we can engender greater inclusivity on our campuses by designing auxiliary programs and outreach programs that bring in students from diverse backgrounds. Indeed, Hannah-Jones invites readers to begin thinking about an array of challenging questions school choice presents to the independent school model. [Editor’s note: If this submission peaks your interest, you may want to explore a long read by the author on the same topic. Called “Choosing a School for My Daughter in a Segregated City,” it was featured in The New York Times Magazine in June 2016.]

In this short synthesis, Megan Beck and Barry Libert (co-authors of The Network Imperative: How to Survive and Grow in the Age of Digital Business Models) overview the age’s dramatic challenge to our lives and careers. Essentially, because not only “doing” jobs but also “thinking” jobs are being (and will be) affected as machines become more and more sophisticated, Beck and Libert highlight the importance of emotional intelligence. They advocate for a “focus on skills and capabilities that artificial intelligence has trouble replicating – understanding, motivating, and interacting with human beings.” The skills to prioritize as society changes are what they call “human capabilities” such as persuasion, identifying leaders, navigating politics, social understanding, and empathy. Beck and Libert’s three-part advice includes: not spending energy on fighting the technology, examining one’s own people skills (in terms of strengths and weaknesses), and developing greater emotional intelligence through experience and training opportunities. As we continually consider our curricular and co-curricular programs, this piece inspires reflection for educators around how we are preparing our students and ourselves for a changing world.

Schwartz and her colleagues explored the top dog/bottom dog (TDBD) phenomenon that states, “students at the top of a grade span have better experiences than those at the bottom.” The research utilized a three-year longitudinal study, including survey data of 90,000 middle school students in New York City public schools. The researchers focused on TDBD’s effect on “bullying, safety, belonging, and academic achievement.” Building on the work of Blythe (1978), which suggested students would benefit from longer grader spans such as K-8 schools, rather than middle schools (6-8) or junior high schools (7-9), Schwartz et. al found that top dogs in K-8 schools reported feeling safer, better known, and more welcome than younger students. Further, the study provided causal evidence that longer grade spans improve experiences and academic achievement for students at the top of a grade span. These findings contribute support for the advantages of the K-8 model and should be incorporated into strategic planning, and in particular, discussions of enrollment management in K-8 schools.

The Problem with Saying “My Door Is Always Open” by Megan Reitz and John Higgins
Harvard Business Review, March 9, 2017

In a brief article, Megan Reitz and John Higgins share their research on communication between people at different levels within an organization. While people in higher positions may genuinely want to hear from other people, including their critical feedback, having an open door policy is not enough to overcome the subtle pressures and barriers preventing them from sharing feedback. Based on research interviewing executives, Reitz and Higgins suggest taking an honest look at current methods for receiving feedback within your organization, including asking yourself whether or not you want it at all. Such reflection can reveal important subtlety. Is it expected, for example, that people visit your office? If so, what might that feel like for them? As noted in the article, “if we are in a powerful position, we often take power for granted [and] forget what it is like to be in the less privileged out-group.” Taking the view from the other side helps to remove barriers that you may not know exist. Additionally, there is further value if we extrapolate to the view of students visiting teachers, as some students will feel these unnoticed barriers even more acutely. 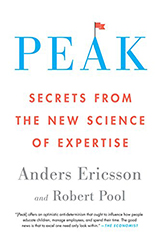 In Peak, the authors delve deeply into how people develop expertise and provide readers with tools to become experts themselves. Improvement is not simply a matter of trying hard or putting in 10,000 hours of practice, though both are part of the equation. Rather, deliberate practice, during which one sets a goal at the upper margin of one’s current ability, focuses intensely on achieving that goal, and receives feedback on performance, is the critical factor in achieving expertise in any area. The authors make a great case for the idea that improvement in any realm is possible for any individual with the right practice techniques and the motivation to push through difficulties. In the final chapter, the authors turn to the use of deliberate practice in an educational setting, describing what by one measure was “the largest effect ever seen in an educational intervention.” They argue that, as educators, we must teach our students how to use deliberate practice as they study and provide them with clear goals and consistent feedback; additionally and ideally, administrators seeking to nurture faculty development should train and mentor teachers in the same way. The quality of our practice is essential. 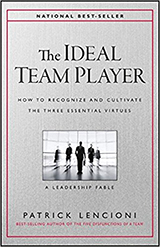 The Ideal Team Player: How to Recognize and Cultivate The Three Essential Virtues by Patrick Lencioni
John Wiley & Sons, April 26, 2016

Patrick Lencioni is best known for his analysis of effective team dynamics in The Five Dysfunctions of a Team. His most recent book, The Ideal Team Player: How to Recognize and Cultivate the Three Essential Virtues, turns its attention to the individual team member, explicating the personal qualities that enable and facilitate teamwork. Lencioni presents his thoughts in the form of a fable; readers are treated to an engaging single narrative for the majority of the book, as Lencioni develops his central theme and offers granular examples via characters within the story. The best team members, according to Lencioni are humble (most important), hungry, and smart. Importantly, that last attribute has less to do with one’s intellect and more to do with one’s ability to deal with the complex, interpersonal demands of teamwork. The final section of the book steps back from the narrative to put the story into perspective; it provides context as well as concrete action plans for organizations that wish to hire and develop workers that exhibit exceptional teamwork. Many schools now focus on collaboration as a central educational value. For those schools that wish to establish teamwork as an essential component of school culture, this book offers keen insights and starting points. 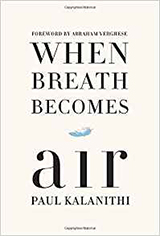 Having Sought and Found

What does “lifelong learning” mean in the face of an unexpected but imminent end? In When Breath Becomes Air, his parting memoir, Paul Kalinithi grapples with the core of a question facing educators and students alike. At the age of thirty-six, in the final months of his training as a neurosurgeon, Kalinithi finds himself diagnosed with terminal cancer. Having devoted his life to studying for a career he will be unable to realize, he embarks on a quest through memory to identify those things in the course of his education that were integral to his determination of identity. Which experiences indeed provided meaning when seen in light of life’s final frames? Dealing specifically with the educational journey of a neurosurgeon, Kalinithi’s writing is applicable to educators guiding students in any field. Caught in the mechanics of schooling, we may easily lose sight of the deeper questions our students experience. As Kalinithi finds, process obscures its own end if students (or teachers) anchor their identity too firmly in work. When Breath Becomes Air offers an exquisitely crafted reflection on what it means to have sought – and found – that which is most important in education.